Bruce Hodges hears the performance at the Phillips Collection, Washington DC, on 6 November 2022 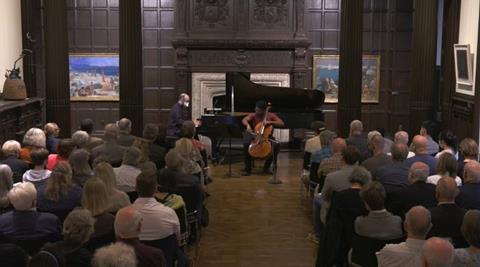 In the wood-panelled splendour of the Phillips Collection in Washington DC, renowned cellist Seth Parker Woods curated an illuminating celebration of works by George Walker (1922–2018), honouring the centenary of the composer’s birth. In his remarks, Woods mentioned he had known Walker since the age of 21, and that all of the works here ‘needed another hearing’.

His assessment was borne out by the Sonata for cello and piano (1957), flowing with melodic double-stops, and in the formidable piano role, Andrew Rosenblum was equally heroic. In the reflective second movement, Woods was particularly tonally persuasive, with long phrases highlighting the instrument’s timbre. (His cello is c.1810 from northern Italy.) The third movement opened with pizzicatos in a crazy dance, decisive piano chords, and ended with a flourish.

Aside from Woods’s curatorial skills, the other news of the hour was violinist Gregory Walker, son of the composer, who began with Bleu (2011) for solo violin. Playing from memory (and with a slightly conspiratorial smile), the violinist offered explosive spiccatos and intricate passagework, ending with a decisively held single note. To round out the programme came the Piano Sonata no.5 (2003), five minutes of Scriabinesque chromaticism with Natalia Kazaryan, Perimeters (1966) with clarinettist Zachary Good, and the lovely Five Fancies (1975) for Good and the two pianists.