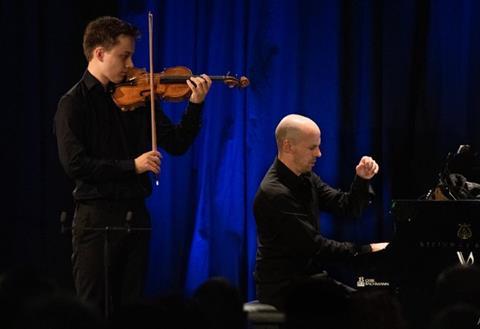 Ravel’s Violin Sonata, three of Sibelius’s Six Pieces for violin and piano, Prokofiev’s Violin Sonata no.2, plus the world premiere of Kaan Bulak’s Violin Sonata no.1 made a meaty Verbier Festival recital from Johan Dalene in a first partnering with French pianist Julien Quentin. While the piano initially overpowered the violin in the Ravel, things soon settled into performances of glued-together mutual awareness.

The Ravel’s central ‘Blues’ movement was especially striking: the swing of Dalene’s opening pizzicato strums; the sheer bluesiness of his ensuing arco’s laconic lilt, coloured by throbbing vocal-style vibrato. But although every piece brought its interpretative and colouristic pleasures, the most intriguing was the Bulak. A concise ten minutes or so, this three-movement work appeared occasionally to be recalling Ravel’s ideas and instrument relationships, albeit very subtly. Among its ear-pricking moments were, in the first movement, wide, juicy violin double-stops leading into an upward glissando that landed in a soft, solo violin dreamscape employing modes and Middle Eastern harmonies. The second movement’s seductively snaking, folkish violin song was set against darkly percussive piano writing, while the Adagio finale offered a modern twist on 19th-century Romanticism; and while its whispered conclusion felt strangely unfinished, perhaps that was the point.