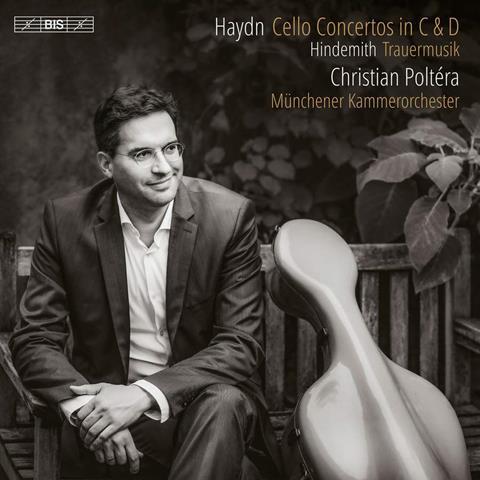 Christian Poltéra is front and centre in these vivacious performances of Haydn’s two cello concertos. His ‘Mara’ Stradivari is in fine voice, throaty and gruff in chivvying low-register passages but singing plangently in the high-lying lyrical writing that is such a feature of both works. That’s especially appropriate in the D major Concerto, now thought to have been composed for a certain James Cervetto, principal cellist of the Italian Opera in London, whose playing was likened (by Charles Burney, no less) to ‘the best tenor voices’. The white-walled Himmelfahrtskirche in the south-west of Munich offers generous resonance to the slightly recessed Munich Chamber Orchestra, without compromising the impact of woodwind and horns.

The cello remained a favourite instrument of Haydn’s, and he gave it impromptu solos in a number of his symphonies, right up until the Trio of no.102 in 1794. Symphony no.13 dates from three decades earlier; its Adagio cantabile is a sweetly appealing concerto slow movement in all but name, with a chaste accompaniment of strings without woodwind. A more surprising coupling is Poltéra’s assumption of the solo viola part in Hindemith’s Trauermusik, a work that perhaps takes on an unintended significance at the time of writing (early to mid-September). This was composed literally overnight following the announcement of the death of King George V in 1936, and copied, rehearsed, performed (under Adrian Boult) and broadcast in his memory within 48 hours. It represents Gebrauchsmusik in its truest form: music of the utmost practicality but which can still touch the heart. Haydn would surely have approved.