Book review: Diabolus in Musica: A Story of Niccolo Paganini 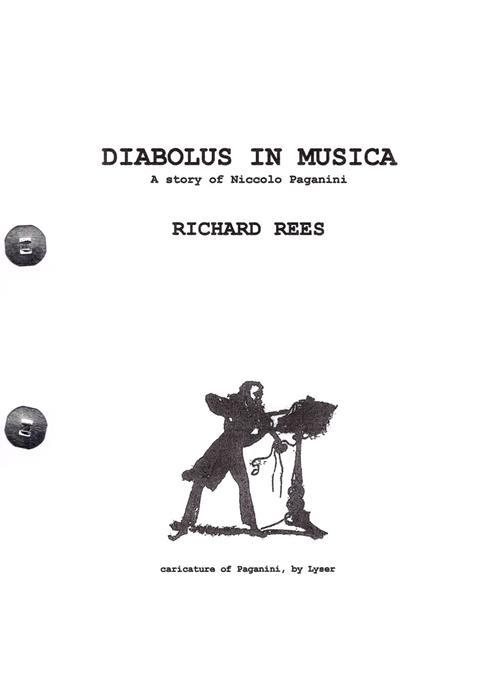 Diabolus in Musica: A Story of Niccolo Paganini

Diabolus in Musica: A Story of Niccolo Paganini

Thanks in no small part to Mai Kawabata’s 2013 biography Paganini: The ‘Demonic’ Virtuoso we are now able to separate fantasy from fact when dealing with the life of the most celebrated violinist who ever lived. We also have a greater understanding as to how difficult telling the story of a fantastical figure such as Paganini can be. While some of the tales handed down over generations are indisputably pure fiction, questioning their veracity only affects how we view this iconic figure today – their part in the legend can never be undone, and they remain an inextricable part of the Paganini mythos.

If Kawabata’s approach was essentially one of rationalisation, by telling the story in the form of a screenplay, Richard Rees focuses on the social context and externals of Paganini’s undeniably colourful career, told in flashback as the Church deliberates as to whether he had been essentially a man of God, or (as was popularly assumed at the time) the Devil’s musical agent. As its final verdict is considered, we see Paganini in action as a musician, lover – special focus is given to his long-term relationship with Florentine courtesan Princess Dida – and once-favoured son of the Church, receiving the Knighthood of the Golden Spur from Pope Leo XII.

Erudite readers of The Strad will find little here in the way of fresh musicological insight: this is a story told for a general cinema audience, not an academic forum. One must also accept the conventions of the genre – scene settings and action points are naturally intended as visual aids, rather than presented in a flowing, literary style. That said, this is far more wide-ranging in its biographical terms of reference than, say, the delightfully twee 1946 film The Magic Bow, and is clearly written for a contemporary audience – an early sexual encounter is littered with light-hearted musical metaphors that crescendo towards the composer’s (literal) climax. Rees proves extremely adept at revealing the complexity of Paganini’s multifaceted personality – it is all too easy to forget sometimes that behind the fabulous technique, dazzling performance skills and creative talent lay a fallible human being, who both initiated and (at times) revelled in the mores of the Romantic era, with all the natural flaws and appetites this implies. I for one will never be able to view the great Italian violinist in quite the same light again.