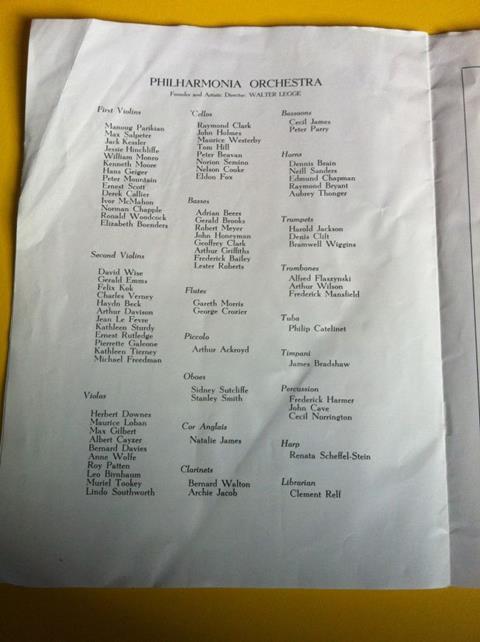 When my mother brought out a box full of hundreds of programmes that my father had collected in his days as a single man-about-town in 1950s London, I knew immediately how important they were for me. A connection with him as I’d never known him – young and carefree. It also provided a lightning shaft of revelation about my own cheerfully eclectic taste. One night it was Wagner at the Royal Opera House; the next, Sid James in some long-forgotten musical farce.

But he also went to many concerts given by the finest string players of the time – Milstein, Oistrakh, Menuhin: my dad was always there. And he got autographs! How amazing to think of him going backstage to get signatures from Oistrakh and Menuhin. What did he talk about with them? What did they think of this 24-year-old man still collecting this inky validation? What a geek! And a string geek to boot! So much suddenly became clear: genes are powerfully specific.

What I didn’t realise was how important these documents might be for other people. When I posted various images – specifically of the orchestral player lists – on my Facebook page, I was inundated by responses. People reacted with memories of these musicians: whether they’d studied with them, or were coached by them in youth orchestras, or just knew what fabulous players they had been. Many of the comments also had an air of nostalgia about them, looking towards this post-war generation of British players as if it represented a golden age of orchestral playing.

The life of an orchestral musician can be a transient one. Where soloists and chamber musicians leave behind individual recordings and interviews and reviews, orchestral players’ names tend to get lost in the mists of time, their sounds subsumed within the group. They are the foot soldiers of music. Without them nothing would happen, yet they sacrifice personal credit for the collective good.

But they do still exist in living memory, and through the wonders of social media and the internet, such memories can become real and public, and something individual can be left behind after all. We would like to create a thread of these reminiscences online and eventually feature them in the pages of The Strad. So have a look at the lists for the LPO, RPO, LSO and Philharmonia. Did you study with any of the string players, or did you ever hear them playing solo even? Share your stories online with us in the comments section below, in the forum, or email us at thestrad@thestrad.com. We look forward to hearing from you, and to honouring these wonderful string players.