2
From the archive: Interpreting Bach
Playing

From the archive: Interpreting Bach

When asked to record Bach’s Cello Suites, violist Simon Rowland-Jones chose to produce his own edition from which to work. He discusses his approach and the various problems it posed.

The five-string viola, by the Armenian maker Martin Yerizian, which enables Simon Rowland-Jones  to play Bach’s Suite no.6 in its original key of D

In 1993 I was invited by Meridian Records to record Bach’s Cello Suites on viola. Apart from a recording by Lillian Fuchs on Decca and an incomplete version for Biddulph by William Primrose, who claimed, somewhat surprisingly, that it was impossible to play Suite no.6 On viola, there were no other complete viola recordings available at that time. Even the Primrose and Fuchs recordings were difficult to obtain.

My first concern was what to play from. No autograph manuscript from Bach survives and players who approach the suites find themselves confronted by an array or conflicting editions; these extant editions, though brilliantly edited in their own ways, had a tendency to reflect their editors interpretations.

My initial attempt to produce my own edition was not entirely free from similar tendencies, mostly because it was meant to serve as a basic for my performances and recording. However, when Peters Edition expressed interest in publishing my transcription, I felt the need to start afresh, ironing out any idiosyncracies and thereby creating something less personal.

This transcription is the result of a thorough study of all surviving contemporary copies and a detailed comparison  of their stylistic characteristics. It aims to reflect Bach’s original intentions, as far as possible, with the minimum of editorial intervention. No fingerings are given, bowings are the logical outcome of my research and all the ornaments that I have incorporated were taken from authentic early copies of the suites. In the absence of an autograph, I hope this edition will serve as something close to the ’Urtext’.

Suite no.6 posed a particular problem. In writing for the five-stringed cello (normal cello plus an additional E string) Bach employs a huge pitch range. The suite can only comfortably be played on a five-string instrument, although  most cellists do play it on a normal four-string cello using thumb position to facilitate the higher registers. As thumb position is not possible on the viola, violists normally play this suite in the key of G. This makes passages in the upper register easier, as they are played down a fifth, but it forces compromising transpositions in the lower registers.

I came to the conclusion that, in order to play Suite no.6 as Bach intended, I would have to commission a five-string instrument. I was fortunate to meet Martin Yerizian, a highly versatile and talented Armenian maker who was interested in my project. Six months later a five-string viola was in my possession (left)  and I was able to play the suite in Bach’s original key of D.

Little is known of the origin of the suites. It is generally believed that they were composed in 1720-21, shortly after the completion of the sonatas and partitas for solo violin. At that time Bach was Kapellmeister al Cothen (1717-23) and it is possible that his good friend Christian Ferdinand Abel (a viola da gamba player and cellist in the court orchestra) was the first to play the suites.

Although Italian composers had been producing a variety of works for solo cello since the latter part of the 17th century, Bach’s are quite possibly the first true suites for solo cello. To understand their style it is important to consider them in the context of a development from the solo instrumental dance suite to the sonata. One thread of influence is the 17th-century French suite, as represented by the viol suites of Sainte-Colombe, his pupil Marin Marais and the more richly textured lute suites of the German composer Esaias Reusner.

The other is the Italian tradition of mixing elements of dance and sonata styles, initiated by Northern Italian composers such as Maurizio Cazzati and most influentially represented by /Arcangelo Corelli in his string sonatas and concertos. The particular element of this Italian style adopted by Bach is the use of sequences to generate long and powerful phrases.

This technique is most evident in the suites’ allemandes and courantes. Until recently most editions of the suites have been based on the Bach-Gesellschaft edition, published in 1879, and on the copy by Anna Magdalena Bach, the composer’s second wife. My edition is based on five separate 18th-century sources: Anna Magdalena Bach’s copy (c.1730), probably made from a lost autograph; a copy by Peter Kellner (c.1726) from a different original; two anonymous copies (1750-1800) from a common source, probably not the autograph; and Bach’s autograph transcription for lute of Suite no.5 (Leipzig, 1727-31; BWV995). 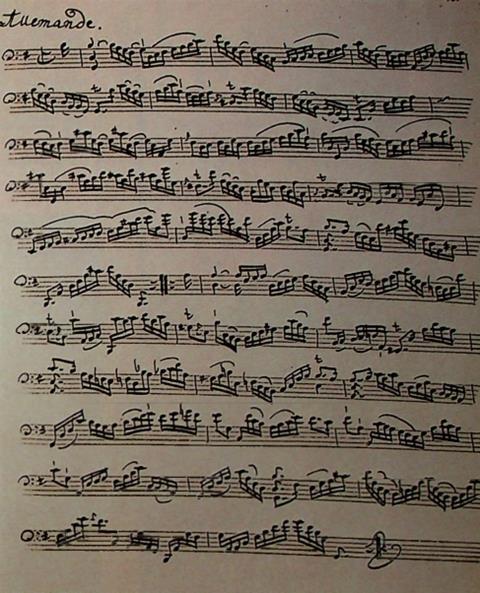 Facsimile of the Allemande from Suite no.1, one of two anonymous copies from a common source

Two versions of Suites nos.5 and 6 are included, due to the special Demands of scordatura tuning in Suite no.5 and the five-string requirement in Suite no.6. Suite no.5 therefore appears first in the scordatura version and second in a version using standard tuning. I strongly recommend the scordatura version. Lowering the top string to G (Bach’s original tuning) entirely alters the colour of the instrument, producing a darker, deeper resonance appropriate to the key of C minor.

Furthermore, Bach’s skilful use of this special tuning produces a unique richness in chords, much of which is lost in the version with standard tuning. In the case of Suite no.6, although a player today is unlikely to possess a five-string viola (in fact some do exist), the original five-string version will nevertheless provide an essential source of reference.

By comparing the two versions, players using the transposed (G major) version, have the chance to see for themselves the places where the transposition is forced up a twelfth rather than a fourth. This additional upward transposition of an octave is only necessary where pitches would otherwise fall below the bottom string, but there is an element of choice as to precisely where the adjustment begins and ends. With my edition, players will have the necessary information at hand to make their own choices about this matter.

I have included a section on ornaments and dotted notes with references from Quantz, J.S. Bach, WE Bach, C.PE. Bach and Leopold Mozart; there are plenty of source-extracted ornaments not found in previous editions. There is also a section on the origins and styles of dance movements with useful quotations from Johann Mattheson (1681-1764), a composer, organist, theorist and writer living in Hamburg during the late- Baroque period. His summaries of the different dance characters, contained  in Der Vollkonimene CapelImeister (1739), are the most comprehensive and clearest descriptions available from the 18th century, for example: ‘The emotion of the courante is hope, since it has an encouraging, yearning, yet optimistic mood.

When it comes to editing the suites, bowings are the prevailing consideration. Anna Magdalena’s slurs are often difficult to decipher. However, her copies of Bach’s music in general tend to mirror her husband’s manuscripts and have an authentic charm. Peter Kellner’s copy is similar to Anna Magdalena’s, though even less clear and sometimes obviously inaccurate. Slurs in the two anonymous sources are more meticulously placed and are a key source for my edition. Although Anna Magdalena’s copy served as the primary source, the anonymous copies helped clear up many ambiguities. I have given only a handful of directional bow marks (distinguished by square brackets). 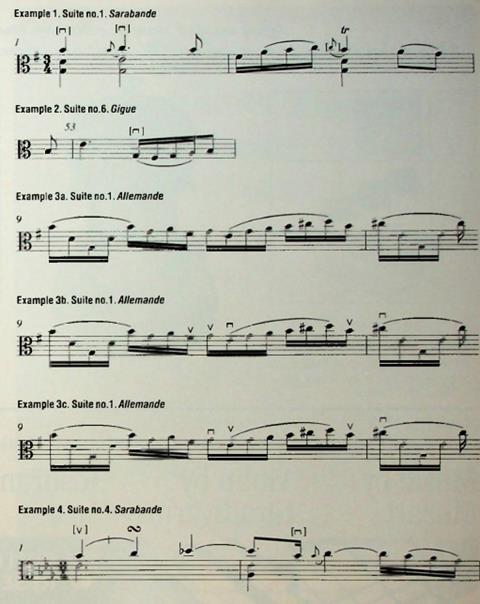 These either illustrate typical Baroque bowing patterns (example 1) or offer a solution to a particular problem (example 2). Where there is more than one solution to a bowing problem, I have left the passage free of directional marks so that individual players can reach their own solutions. As my edition stands, the bowings do not necessarily ‘work out’ (example 3a). The solutions I have offered here (examples 3b & 3c) — that is, taking more than one detached note in the same direction - are entirely in keeping with Baroque playing style (see Georg Muffat in his preface to Florilgium Secundum (1698) on the Lully style of performance). The ties in the Sarabande of Suite no.4 are an interesting case in that, in my opinion, they necessitate starting the movement on an up bow (example 4). Although an unusual practice in the Baroque period, this bowing provides exactly the right ‘up-beat’ bar feeling to the opening phrase.

Where bowings are either unclear or obviously absent from all four sources, I have based my bowings on clearly marked examples from elsewhere in the same movement.

The sources make it clear that arpeggiated chords are invariably taken  in one bow (example 5) and therefore not in any one of a variety of convenient bowings favoured earlier this century. In the Prelude of Suite no.3 (bars 37-44), the arpeggiated slurring makes for a pleasing syncopated effect, where rhythmic emphases occur quite naturally on the half beats and the main beats in alternate bars (example 6). Slurs over triplets are often misleading. What appears as a slur over three notes may simply be part of the triplet indication. 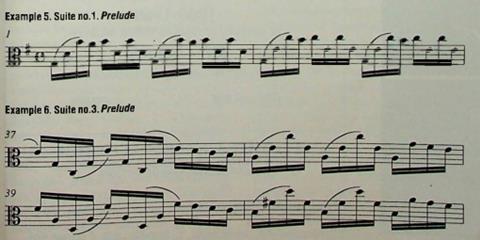 Also, groups of three quavers in movements in compound time are almost invariably slurred in the cello suites. Leopold Mozart makes it clear that one is not expected to follow these slurs literally. He offers the following  useful advice in his Versuch einer griindlichen Violonschule (Chapter IV, §29): ‘Now the question is, whether the first or last two notes should be slurred together?… The following rule can serve to some extent: notes at close intervals should usually be slurred, butnotes far apart should be played with separate strokes and in particular be arranged to give a pleasant variety’ (example 6).

The suites themselves encourage constant discovery, evolution of ideas and wide-ranging modes of expression, and no matter how much time and energy one gives to the suites, the learning experience is never over. As a teacher, I have learnt that the Bach Cello Suites lend themselves, perhaps even more than other music, to an infinite variety of interpretations. Intervention by a teacher in this crucial process often leads to a stifling of creativity. These works, by their very nature, encourage creativity in abundance, and I have done everything I can to keep out of the way of individual creative paths, providing an edition, which though full of information, is only a starting point.