‘When we spoke, it was as if I had known him all my life’ – Guy Johnston on Anner Bylsma 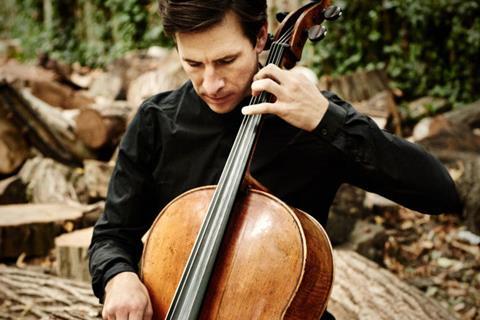 I’m grateful to the London Cello Society for inviting me to write about my memories of studying the Bach Suites with Anner Bylsma. I was fortunate to have been introduced to Anner about six years ago by Steven Isserlis. I felt compelled to make contact having read his wonderfully entertaining book, The Fencing Master, in which he playfully shares his interpretation of the bowings in Anna Magdalena’s manuscript. Knowing that I was due to guest lead the cello section of the Royal Concertgebouw Orchestra, I took the opportunity to make contact while visiting Amsterdam.

On the way to Anner’s home just off the Vondelpark (not far from the Concertgebouw), I felt excited yet daunted by the prospect of playing for this musical giant. I remember hearing Anner give a masterclass at the Manchester Cello Festival in the 1990s. I was particularly struck by the inspiring way in which he described musical and physical ideas through anecdotes about life. I couldn’t wait to get inside the Bach Suites and to hear his thoughts in person.

I walked down the canal streets after a short tram ride, crossed the road (minding the cyclists along the way!) and, with my cello on my back, gazed up at the leaning houses looking down at me. I was full of anticipation: What would Anner think of my playing? Could I impress him with my newfound knowledge of the Suites inspired by his book? Thankfully, I was put at ease as soon as I stepped through the front door. Bobby, the dog, started barking the moment the bell rang and jumped up to welcome me. Anner’s wife, Vera, offered me coffee and cake and, moments later, Anner made his way over to the kitchen table on his Zimmer frame. I was immediately struck by his presence. When we spoke, it was as if I had known him all my life.

This meeting marked the beginning of a special musical friendship. During the last six years of his life, I was lucky to journey through these cherished Suites with him and reach the final two only weeks before he sadly passed away. There’s a picture here of Anner and me toasting the Suites at the end of our last meeting. That session was particularly challenging. Anner fired a number of questions at me which left me feeling like I had let him (and Bach) down: ‘Why don’t you play the 5th Suite tuned down? Why do you play the Fugue like a study? Why haven’t you come with a five-string cello for the 6th Suite?!’ It felt like Anner, who seemed more tired than usual that day, was losing patience with having to repeat himself to novices of the Bach Suites like myself. ‘You all sing too much about yourselves these days,’ he exclaimed, ‘joining all the notes up and taking no notice of Anna Magdalena’s source. The music shouldn’t just sing, it should speak! Play that again, I don’t hear the words, the meaning. Listen to the notes that aren’t there, but which are implied. It is senza basso, but we should hear the missing continuo.’

Watch: Back to Bach: Anner Bylsma

Even though Anner was physically unable to play the cello in later life, he continued to relish the opportunity to communicate musical ideas and intricate details in Bach’s work, as if the music had only just been created and the ideas had just come to him. Luckily, many of his thoughts have survived, not only in his recordings, but in his inspiring, engaging and often eccentric books: Bach The Fencing Master, Droppings, Bach and the Happy Few, Grumbler’s Bach.

Through his writings and our in-person sessions, Anner prompted me to reinvestigate the Suites from the perspective of Anna Magdalena’s copy. Yet, there was always a sense that there was room for manoeuvre - you could make up your own mind about which notes the slurs are tied to, particularly given the lack of clarity in the manuscript. For example, there are instances when it’s hard to interpret a four-note grouping. Is it one separate and three notes together; one separate, two together and one separate; or three together and one separate? Anner would muse over the solutions with a chuckle: ‘Look how the bowings work out so logically this way. The bow will always come back and isn’t it wonderful that not every bar needs to land on a down bow?! Listen to all those inner rhythms along the way and the endless variation. You shouldn’t just tie all the notes together mindlessly as if you know better than Bach!’

I think Anner believed that Bach was not only experimenting with a new instrumental language away from the ‘norm’ of repeated bowing patterns, but that he also wished to challenge the player by requiring her/him to remain present in the moment – ensuring the avoidance of automatic, ‘convenient‘ bowings (e.g. many notes tied to a slur and the consistent use of down bows at the beginning of bars). There are occasions when long slurs appear in the score (e.g. in the 4th Suite Prelude), but these are rare. Anner would encourage unorthodox solutions. He revelled in the quirks of back to front bowings (e.g. using a down bow on the up-beat of the Gigue in the D minor Suite), going against the grain of ‘modern‘ cellists who intuitively use up bows on up-beats and down bows on down-beats.

As a general rule, Anner would only tie two, three or four notes together under a slur (under the hand before it has to move position, rather than connecting notes with a shift during a slur). He often suggested staying in lower positions as much as possible, guiding the bow towards the bridge to emphasise important notes and leaving less important notes behind. ‘Play this bar as if you’re looking over your shoulder’ he used to say. ‘Delight in the varying patterns of slurs during sequences - it keeps us entertained, and alive to the inner musical dialogue.’

One of my most treasured memories was working with Anner on the D minor Suite ahead of a performance at the Weesp Chamber Music Festival just outside Amsterdam. I was to perform the Suite for the first time and was eager to hear his thoughts. Anner’s presence was with me throughout the performance. Peeking through the door at the back of the church before entering, I could see a light shining through a stain glass window, reflecting multiple colours on the stage where I was about to play. I was reminded in that moment of Anner’s timeless advice: ‘You should play like a minister preaching from the pulpit. Listen to your audience.’

Anner’s wisdom remains with me today. His smile, often appearing at special moments when I was able to get to the heart of the music during our sessions, was infectious. My memories of him continue to live on vividly and I will always be grateful for his patience and wisdom. Writing about the Suites in his book Bach, The Fencing Master, Anner captures some of the challenges faced by musicians of the past, present, and no doubt, future when entering the sacred world of the Bach Suites.

A Sphinx, that’s what Bach’s solo pieces for the violin and for the cello have become. Three hundred years of opinions of lesser men - always lesser men than Bach - have made it impossible to read what it says in the wonderfully clear quill-pen texts, of which we all have copies. String music used to be a world of its own, full of idiosyncrasies like up- and down bow, crossing of strings, open string-notes, separate or slurred notes, playing near or far from the bridge, double stops with different lengths and tones with vibrato, with accents, or special diction in the middle.

Nowadays, preconceived ideas of people, who do not even play a string-instrument themselves, often are directing our bow-arms. My books about these works should not be necessary at all for anybody, but at this moment they will be one of the few ways to re-discover some of the lost charm of our sphinxes. When string-playing is left to people who can only play to the tune of a ‘conductor‘, the price of a Stradivari will soon be equal to that of a good saxophone.

Guy Johnston performs Bach’s Cello Suite No.2 in the Chapel & Marble Hall at Hatfield House on Friday 2 October as part of his online streamed festival at Hatfield House, in a programme that also includes Glière’s Berceuse Op. 39 No 3, Puccini’s I Crisantemi and Mozart’s Clarinet Quintet, .581 with the Navarra Quartet and clarinettist Julian Bliss. To watch, click here: https://www.youtube.com/user/hhcmf

Ahead of the concert, here is a video of Guy Johnston performing Bach’s Cello Suite No 2, shared exclusively with The Strad.