Position and freedom: keeping the two in harmony

John Crawford, teacher of violin and Alexander Technique at Trinity Laban Conservatoire explains why a position-orientated approach to string playing may not serve us well 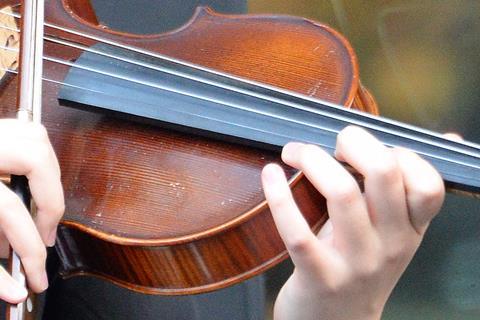 I have become aware over the past few years of an increasing tendency to examine and define the necessary technical foundation for string playing in terms of angles and positions. This is of course not new; it is part of our legacy from great teachers, and definitely has its place in the pedagogy repertoire. However to make it primary, as was recently advocated in this magazine (I quote ‘the reason the great players of the past played so well is because their hands were naturally in the right positions’) seems to be a gross oversimplification of the issues involved.

Tobias Matthay (1858 - 1945) wrote a book about his approach to piano teaching and playing entitled ‘The visible and invisible in piano playing’.  It is a salutary read.  In speaking of the use of the finger, hand and arm in piano playing Matthay writes:  ‘In the past it was sought to accomplish such Diagnosis of Touch (or Technique) by  carefully observing the MOVEMENTS exhibited by successful players. Unfortunately this method is not only very precarious, but is often quite misleading, since the movements which accompany touch give but little (or even illusionary and misleading) indication of those hidden and invisible stresses – exertions and relaxations of limb, which are the real CAUSE of the desirable and undesirable effects.

Correct movements are therefore no guarantee whatever that the correct actions are being provided.’ If only it were so simple as  copying Heifetz’ hand positions (and by the way I haven’t noticed many people copying his right arm position….)!  There are several relevant issues here. Firstly to treat hands as ‘things in themselves’ denies the obvious reality that their state is  a reflection of the quality of the whole organism. Everything is interconnected, and truly the structure operates as a whole. As stated in ‘The Russian violin school, the legacy of Yuri Yankelevitch’: ‘One must never forget that the human organism is a unified system. No matter where an area of tension may originate and appear, it will always limit the freedom of movement in the arms. Therefore, achieving freedom of movement in, say, the left hand, is impossible without  simultaneously freeing the right arm and maintaining a relaxed condition of the shoulders and torso.’

Of course this principle works both ways; we can influence the whole by changing the quality of the hands, but to separate the hands from the rest and treat them as isolated structures is not helpful, if only because it does not reflect reality.  I can change the shape or position of the hand as much as I wish but if the freedom of the arm is compromised because of an unbalanced support of the instrument or other perhaps less obvious compressions, it will do little good.

Another important misunderstanding is exemplified by the statement (in the same article) that ‘it is always the hand that dictates the position of the fingers’.  This goes against what is fundamental for us;  the hand is there to support the needs of the fingers. The miracle of evolution of the arm, wrist, hand and fingers is to enable the fingers to enjoy the extraordinary range of movement and skill which they possess.  In our everyday lives we do the most ridiculously complex things with our fingers and thumbs;  cleaning teeth, washing up, writing, texting, drawing; in each of these activities the fingers lead the movement. This is the way the brain is wired to  work, and we go against it at our peril. Is playing the violin fundamentally different? It may be more complex, but surely the principles remain? To allow the wrist to dictate the position of the fingers makes no sense in any activity. This may seem to the casual reader a minor distinction, but the potent effect of a way of thinking which goes against nature can be far reaching in its consequences.

Read: Technique: the importance of practising in 5ths

Read: Double bass beginners should play in all left-hand positions

An equally powerful argument against a position-orientated approach to the problems of string playing is that in reality the only way we can maintain a hand position in the act of playing is by stiffening, which often goes unnoticed because the external ‘look’ might be where our attention is drawn. It’s the invisible, the inner dynamic of the position which is important, and this is more difficult to assess and improve. The position in space is important, but it should be the result of the needs of the moment being responded to by a freely available structure. Addressing the freedom of the hand by putting it into a position is akin to putting on a bracing corset in order to correct your posture. The position should never be a causal factor but the result of a healthy relationship between all parts. One can have a Heifetz-like position of the left hand and be as stiff as a board. What then?  Adjust and try Perlman’s hand position?  And for which note in which context? If we were able to measure we would undoubtedly see that minute changes in the configuration of all the joints of the arm are happening from note to note. If there is a background idea of maintaining a ‘correct’ hand position these movements cannot take place. Having the conception that the fingers can lead the hand and arm into whatever configuration is appropriate, with all the joints involved available and ready to serve, is not only a more realistic idea; it also accurately reflects the nature of the reflex patterns of movement which need to be activated.

I suggest that instead of looking at the externals of shape and position as primaries, a more fruitful approach would be to work from a basis of developing, or rather allowing, sensitivity of touch in both hands as a basis of technique. Of course in itself this is not enough, but what is important to recognize is that if it is not present the possibility of a naturally open and flowing connection between brain and fingers is very likely to be absent. We certainly cannot see from the shape of a hand whether this all important flow is present; but we can often infer it from the quality of movement which is taking place. The element of good quality and sensitivity in the hands has an importance far beyond the externals of position.  In our own daily work we can gain much from a reawakening of sensitivity of touch and the naturally resultant ease and lack of fixity which will tend to follow.

In memoriam I have just watched some clips of the late Ida Haendel, surely one of the greats of recent times. The idea of ‘hand position’ in the context of her playing just evaporates into meaninglessness. In fact one could say that the hand as such doesn’t really exist; there is just an open connection between brain, heart and fingertips which is an ideal for us all.

The Russian violin school, the legacy of Yuri Yankelevich. O.U.P. 201