The Solem Quartet reflect on harnessing creativity to inject new life into canonical works, as well as developing unique new works in collaboration with each other and living composers 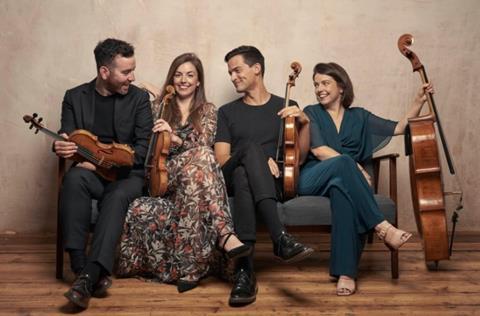 As listeners, we draw all sorts of connections between the notes we hear. One beautiful moment of music can set sparks flying in our imagination as we conjure parallels across centuries of art, history, literature and theatre; all seen through the lens of our own human experience. As a quartet we’re always striving for more meaningful ways to connect with audiences and tell the story of what gets those fireworks going in our own brains.

We all listen to a broad range of music, but this is rarely something that, as classical quartet players, we get to express explicitly in our performances of other composers’ works. When a band covers another band’s song, it is partly an expression of admiration for that song, and partly a way of making it their own. The same could be said for the virtuoso piano transcriptions by Rachmaninov and Busoni, or Kreisler and Heifetz’s beautifully sentimental arrangements of older works - pieces that form something of a staple diet for most young violinists

When the idea came to us that we ourselves could arrange the music we love, a door into a whole new world of musical possibilities opened for us; here was a chance to take the string quartet genre in a new direction of our own and place some of the greatest, most established masterpieces of the genre into a wider context.

The combination of creating our own arrangements and programming the old and new alongside one another allows us to share with audiences the many musical connections that excite us and get our musical synapses firing! Our recent album ’The Four Quarters’, to be released in September 2021 on Orchid Classics, was an expression of that approach - we wove a thread through an eclectic mix of pieces to tell the narrative of a 24-hour cycle. We wanted to evoke the way light changes throughout the day, the ebbs and flows of energy as hours pass of an afternoon, and the magic of early sunrise and sunset. Purcell, Bartók, Kate Bush, Schumann and Ivor Gurney all contribute to the story, through our own translations, combined with the powerful voices of living composers including Cassandra Miller and Thomas Adès.

Working with composers such as Thomas Adès has been another wonderful way for us to make connections with the past. What better way for us to imagine ourselves in the shoes of the Schuppanzigh Quartet, who premiered many of Beethoven’s quartets, than to work first hand with one of the greatest composers of our time!

Being part of the evolutionary process of a composition during its early rehearsal stages, when we often have the opportunity of working with the composer first hand, often illustrates to us that the dots on the page don’t paint the whole picture. The creativity and flexibility we so often encounter in these collaborations in turn gives us the freedom to approach older music in a fresh, less dogmatic way. It’s our job to interpret the notes and craft them into something that tells a story to our audience.

In the laboratory of our composer workshops we’ve seen notes chopped, added, flipped, rearranged, magnified, tweaked, and even changed completely with our own compositional ideas added to the mix. The whole process helps us to remember one of the most important things about any composer, whether alive today or 400 years ago - that they are human. Music is rarely, if ever, conceived fully formed, and composers have choices to make about how best to depict their ideas through the limitations of the notated score.

So what would it have been like to sit in Ignaz Schuppanzigh’s chair, faced with a newly inked score, the likes of which had never been seen before? How would it have felt to face challenges that a quartet player had never dreamt of, to have had to think outside the box about how to make sense of these demanding notes to a somewhat suspicious audience? These are questions we love to think about when sitting down to rehearse Beethoven ourselves, drawing on the experience of the many wonderful living composers with whom we’ve had the privilege of working.

Our explorations in this area have been a huge part of what led us to present our latest series, ‘Beethoven Bartók Now’. The series, which launched in July 2021, draws together the six monumental late quartets of Beethoven, the six pioneering quartets of Bartók, and six new works specially commissioned for the series.

Beethoven cast off the chains of a traditional four movement work as he delved into his late quartets and conducted wild experiments in structure and form. A century later Bartók embraced the newest technology in his work, using one of the earliest phonographs to record villagers playing and singing folk music throughout the countryside. Another hundred years on, we’re reimagining the boundaries once again, presenting our Beethoven Bartók Now concerts in playlist form and weaving an emotional thread through individually chosen moments from Beethoven and Bartók quartets, interspersed with our newly commissioned pieces.

Interpreting canonical works, embracing new ones and reimagining everything in between - this is what drives us as a quartet. In the 21st century the possibilities for new connections are awe-inspiringly endless, and exploring them will keep us on our toes for many years to come.

Watch: Solem Quartet: a reflection on Bartók’s Quartet No. 5