Intermediary notes are unnecessary for shifting

One the great pedagogical minds of the 20th Century, Yuri Yankelevich (1909-1973) wrote an extremely detailed treatise on shifting that has now been published in English by Oxford University Press. Translator Masha Lankovsky takes a look at one of his conclusions 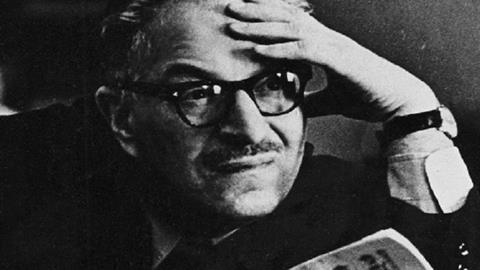 Intermediary, or auxiliary notes are those 'helpful' notes that correspond to where a sliding finger would find itself in a new position as another finger produces a new note. For example, if shifting on the A string from the first finger on the note B in first position to the third finger on the note F in third position, the intermediary note would be the first finger on the note D in third position.  Countless violin methods incorporate intermediary notes, in essence simplifying more complicated shifts to simpler shifts made with one finger.  And yet, though this technique appears to make theoretical sense, Yuri Yankelevich demonstrated that in practice the sliding finger rarely arrives at the corresponding intermediary note.

In the work that originated as his doctoral dissertation, Yankelevich conducted a series of oscillographic recordings of three eminent violinists of his time, David Oistrakh, Yakov Rabinovich and Dmitri Tsyganov.  He analysed shifts played by these violinists both with and without musical context and presented the results in the form of graphs delineating the pitch on one axis and the duration (in fractions of a second) on the other axis.

One characteristic the graphs immediately reveal is that the sliding finger generally starts sliding slowly and accelerates towards the end.  Although shifts are not always taught this way, musically this makes perfect sense. By starting slowly not only does the distance of the shift seem smaller but this is also closer to how a singer would leap from one note to another.

Read: how to achieve quick reflexes in your playing

Another important result the graphs show is that when shifting from one note to another each individual violinist differed in how long he kept the original sliding finger on the string. More often than not the sliding finger never arrived at the corresponding intermediary note. This became even more pronounced as the distance of the shift increased. In shifts the interval of a seventh the sliding finger fell short of the intermediary note by a whole tone or more, in shifts of a tenth it could fall short by four and a half tones.

When making an expressive ascending shifting from a lower finger to an upper finger by sliding with the upper finger, the shift never started with the corresponding intermediary note. In all cases the slide began much closer to the second note, becoming a kind of 'ramp' (as Konstantin Mostras called it) leading into the note. Yankelevich does point out that Carl Flesch acknowledged these kind of shifts were possible but referred to them as 'free portamento-fantasies' and only characteristic of certain performers. In some cases the upper finger might even start to slide by contracting close to the first finger to begin a very long glissando, again ignoring the corresponding intermediary note. Indeed, Yankelevich concludes that the nature of finger movement in shifts should not be determined by intermediary notes, but solely by the specific sound required by the character of the music.

Read: Technique: A 30-minute routine to keep your playing on top form

When shifting from a higher finger in lower position to a lower finger in a higher position, intermediary notes make even less sense since they fall outside the interval connecting the two notes and entirely disrupt the musical line.  The same applies for the reverse, when shifting from a lower finger in a higher position to a higher finger in a lower position, such as in descending scales. In these cases it is very important that the initial lower finger release and not maintain its pressure until the corresponding intermediary note.  Indeed, the excessive pressure of keeping the fingers on the string is one of the reasons so many violinists encounter difficulties in quick descending scalar passages.

Yankelevich does take into account that intermediary notes may be useful in the very earliest stages of learning the positions; they allow the student to develop a sense of distances on the fingerboard and help organize the correct placement of the fingers in the new position.  However this method should be as short-lived as possible, so as not to turn into a reflex and bad habit.  Yankelevich always drew attention the vocal nature of the violin.  Intermediary notes are entirely unnatural to singers and, as the oscilligraphs show, not actually used in professional practice. It is important then for students to get rid of this crutch as soon as possible and develop greater  freedom in moving around the fingerboard.

Yuri Yankelevich's treatise on shifting is included in 'The Russian Violin School: The Legacy of Yuri Yankelevich'.  The Strad readers can use code AAFLYG6 for a 30% discount upon checkout from the Oxford University Press website.