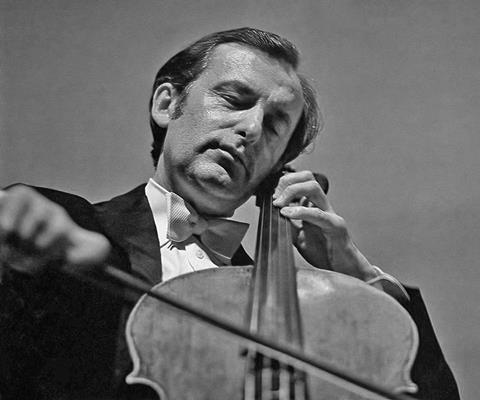 The following extract is from The Strad’s September 2021 issue  feature ’The Unsung Hero’. To read it in full, click here  to subscribe and login. The September 2021 digital magazine  and print edition  are on sale now

The opening phrase of Schubert, Ave Maria, D839 in Shafran’s interpretation, to be played entirely on the D string. Note the whole-tone extensions between third and fourth fingers and frequent stretches.

Partly because of Shafran’s broad handspan and the shorter stop length of his cello, he could replace a good number of shifts with a stretch, moving around the fingerboard in an almost violinistic manner. Therefore, he was free to keep audible shifting only for expressive purposes (rather than as a means of changing from one position to another) and avoid it altogether in places where he considered it in poor taste. Occasionally, he employed a unique sort of portamento (both ascending and descending), dragging the finger through all intermediate chromatic steps before reaching the destination note.

The most striking (and most frequently imitated) expressive tool used by Shafran was a vibrato that set him apart from other cellists. With his massive fingertips covering a large surface of the string, his vibrato could reach an almost electric speed. His expressive treatment of it was remarkable: non-vibrato (so-called ‘white tone’) could be followed suddenly by an intensely fast vibrato. It became his trademark, known to fans as ‘Shafranism’.

Shafran strongly believed that much as a brush stroke defines a painter, the cellist is defined by bowing technique – in terms of application of bow strokes, articulation and sound production. He preferred to play with looser bow hair and varied the slant of the stick with the help of his right-hand fingers: thus, by using less hair in the lower quarter of the bow, Shafran achieved an equal distribution of arm weight, resulting in a balanced sound throughout the bow. Shafran’s bouncing strokes had a special clarity, as if they were more spoken than sung. He controlled the bow speed and contact point with a watchmaker’s precision, developing a wide palette of dynamic nuances.