How to breathe freely when playing a stringed instrument 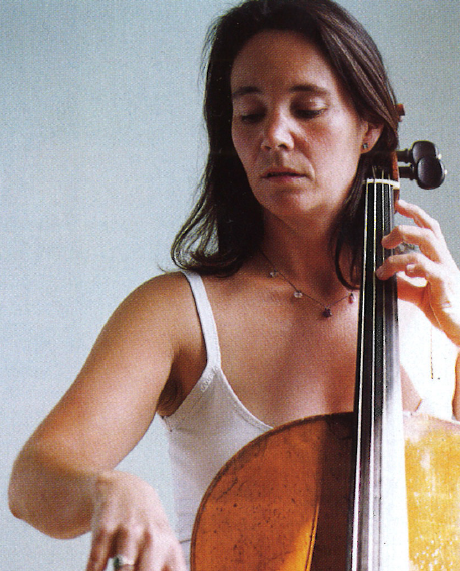 The in-breath followed by the out-breath is a form of expansion and contraction, which is the essence of bowing; it is receiving and giving inspiration, which is the essence of performance; it is tension and release, flow and ebb, life and death, control and abandon. It is, in effect, our greatest teacher. Why, then, when I asked dozens of string players whether their teachers had ever mentioned breath, did 90 per cent say no?

To make musicians aware of the seminal importance of the breath and the direct link between breathing and the bow arm, I developed the following process which I carry out with a group of cellists. It is equally suitable, however, for practising at home with a CD player, or with a teacher. When following these steps it is essential to develop a spirit of interest and compassionate observation throughout. As feelings and thoughts arise it may be necessary to repeat certain parts in order to maintain this spirit. This is a meditative process, which can be utterly transformative. It emphasises the quality of attention given to the breath and invites us to notice how it and the music move us, rather than us moving the breath and the music.

1. With your instrument down sit with your arms hanging loosely by your sides and start to breathe into the sides, front and back of your rib cage. As you breathe in, observe the arms being pushed out to the side by the expanding side ribs, and the shoulders gently rising with the clavicular expansion. On the out-breath observe the release of the shoulders back down and of the arms back into your sides.

2. Listen to a legato piece of music you are familiar with (Saint-Saëns' The Swan works well.) As you listen feel the expansion and contraction of the phrase in connection with that of your breathing, allowing your arms to float up and out as the musical tension builds and then to fall back to your sides as it releases. Thus, through the gentle amplification of the breathing, the seeds of bowing are sown.

3. Repeat the previous exercise but with your cello resting in the playing position. Observe any changes in your breathing pattern. Almost without exception, these occur due to the sudden proximity of the instrument. The most common change for cellists is that they start breathing into the upper chest, cutting the breath off where the cello meets the body, as if the instrument replaces the body. In my experience feelings of anxiety, shame and being 'ungrounded' are also common.

4. Having observed these physical and emotional changes, explore the body of the instrument and your own body through touch, creating one living, breathing instrument. As the melody plays try tracing the concave/convex curves of your body and those of your instrument. For cellists, touch the belly of your cello and your own belly, the neck of your cello and your own neck, and feel the strings mirroring your vocal cords as you touch your throat. Imagine the cello's rib cage expanding with the breath of a phrase as your rib cage does, and try to bring this to life through touch.

5. The next step is to introduce the bow. With your left hand at rest on the neck of the instrument, take the bow gently in your right hand, which rests on your lap. Repeat the listening/breathing/observing exercise. At this point, because of the physical contact with the bow, it is common for the head to jump in with thoughts of up bows and down bows. As a result, the simple breathing pattern is often upset and panic can set in.

6. Listening to the melody one more time, play open G strings on each half-bar, allowing the breathing and bowing to become one with the slow pulse of the music. It will become startlingly clear that pulse, or metre, is the body of the music. Pulse becomes the physical/earth element and is understood as different from the intricacies of rhythm.

7. The final stage is to play the melody. You will become aware of the different kinds of stress that can be experienced as the body opens and closes, tenses and releases, and how there are moments in music of stressed expansion (up bow) and stressed contraction (down bow). This challenges the common decision to dole down bows out to every musical accent and brings a whole new emotional realm to bowing.

These exercises are not intended literally as a way of playing - that is, breathing in when there is tension in the music and out when there is release, or indeed breathing in time to the music - but rather as a process towards freedom and 'groundedness' in performance. The idea behind all 'breath work' is not to be bound by our breath but to be aware of it, in order to liberate our physical and emotional responses. There are times when we will draw actively on this connection and times when we need extra support or release, such as at specific moments of expansion, emphasis or climax in the music or when we start a movement (the most natural preparation for starting - or 'releasing' into - a movement is to breathe in, letting our arms follow that motion, and to play on the out-breath, just as a singer would sing on the out-breath). This will be conscious at first as we change our habits and holding patterns. Eventually it will become second nature, and breathing out or holding the breath before playing will feel as unnatural to the string player as it would to the oboist or the singer.

Working with our breath in the manner described above can heal the divide between our physical body, the body of the instrument and the body of the music. It grounds us in matter and, being grounded, we can safely begin to explore the other elements of music making. Without such grounding the emotional and spiritual demands on the performing musician can be terrifying.

Breathing can also have a profound effect on stage fright. After a term working with breath, movement and the voice, all the students in the group reported that they were enjoying performing for the first time. They were not nervous but rather aware of having extra energy available to them, which they had learned to ride. The two that habitually took beta-blockers had chosen to stop because they wanted to be in contact with this energy rather than blocking it. The yoga teacher Peter Blackaby said recently: 'To be immersed in the body and the breath is to be present in the 'old mind'.' If we are physically present when playing we will access not the busy fearful mind of judgement and competition, but the wisdom of the mind of the musician that always sings within us.

This article was first published in The Strad's June 2002 issue