How I warm up: violist Maxim Rysanov 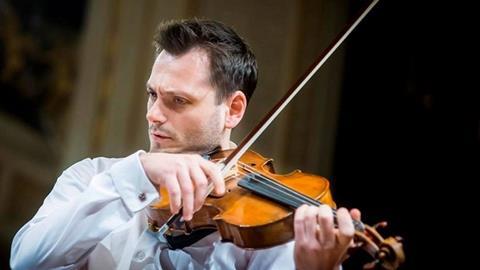 The following piece from our archive is linked to the Technique article in the March issue of The Strad on warming up the bow arm when playing the cello.

My full warm-up routine usually takes about 30–40 minutes. Normally I warm up with a four-octave scale, four octaves of arpeggios, and two octaves of double-stops. The scale I choose is always dictated by the work I have to learn or perform on that particular day. If time allows, I also do some vibrato and shifting exercises.

First, I play a full scale in a very slow tempo – one bow per note. I play each note for around five or six seconds, trying to play piano, without pressure, and concentrating on the equality of the sound of each note – there should be no sudden crescendos or diminuendos in any part of the bow. I also make sure that there are no unnecessary movements in the right hand, not only during the note itself but also between notes. I need to be able to make bow changes very smoothly: it allows me to make any sort of phrase I want by freely changing the bow up or down without feeling dependent on the bow changes. Then I increase the tempo, while still playing just one note per full bow.

Then I practise détaché strokes in the middle of the bow. (I use very little of the bow for this.) At first I go slowly, then faster and faster. I try to listen to the connections between the notes, so that the left-hand fingers fall in place along with the change of bow direction. The whole thing should sound as legato as possible.

After that I play long spiccato, three times for each note, at the frog. I try to make each note exactly the same length, as the common difficulty is that the bow is harder to lift after a down bow. Again, I practise the exercise slowly at first, then faster. Then I return to the middle of the bow: four notes détaché on the string, followed by four notes spiccato. The sequence is to be practised in slow, medium and fast tempos, and then very fast, using only spiccato. Spiccato should be a controlled stroke: it should not be understood as a freely jumping bow. In very slow motion, spiccato is détaché with a lift of the bow after each note.

The next thing I do is the ‘dotted rhythm’ exercise. For this I use the full bow and start in forte, gradually varying the dynamic and pressure but letting the bow rest on the string – not lifting it from the string. Before I get to the up bow, I hook the short note of the dotted rhythm in at the tip of the bow. Then I start the up bow forte and repeat the process.

Read How to make the most of cello scales

I then practise portato: four and eight notes per bow, concentrating on the elbow movement – open and closed, not stopping between notes. After that, I play legato – four, eight, sixteen and twenty-four notes per bow.

Then I continue with arpeggios. I play four notes in each bow, concentrating on shifting and my left-hand position. I try to relax my left elbow, so that it can turn towards my chest to feel comfortable in the high positions. The thumb can come out from under the neck and lightly touch the side of the fingerboard when moving into a high position. For violists to reach the higher positions freely, we can help ourselves by turning the elbow and moving the thumb out, so that the left hand almost keeps the shape it has in third position. On the shifts, I try to relax the pressure of the finger I’m sliding on, to achieve the feeling of playing a harmonic.

I start the arpeggios from the same note and vary them harmonically (for example: minor; major; first and second inversions; dominant 7th).

I finish with two octaves of double-stops, in 3rds, 6ths and octaves. I find that practising double-stops is a good exercise to keep the left hand in position, so that my fingers are not being lifted too far from the string without a reason.

Read our Technique article in the March issue of The Strad on warming up the bow arm when playing the cello.

Read how Maxim Rysanov practises a viola arrangement of Bach’s Sixth Cello Suite in the January 2014 issue. Click here to subscribe or login. Alternatively, download on desktop computer or through The Strad App.

Read: How can I help to conquer performance nerves by warming up my stiff, cold hands?