8 ways to vary your vibrato

Tips from The Strad’s archive for varying vibrato speed, width, pressure and direction to produce an infinite range of colour contrasts 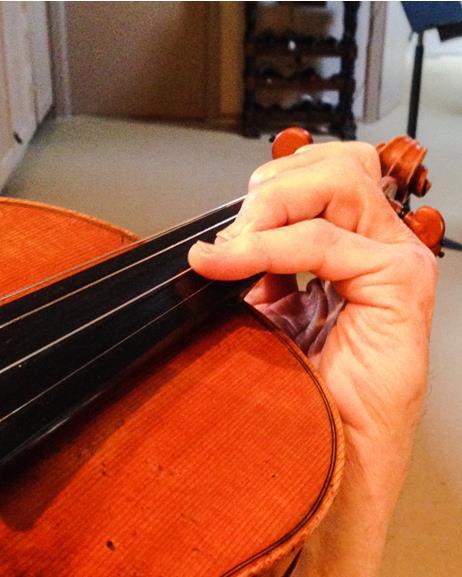 The two main aspects of vibrato are speed and width. Both vary constantly with the character and expression of each note. It is rare that even two consecutive notes have the same proportions of speed and width. The most natural proportions are wide and slow, narrow and fast, but, like an artist mixing primary colours to obtain an infinite range of different shades, the musician’s range of different vibratos extends all the way to wide and fast, and slow and narrow.
Simon Fischer, The Strad, April 2004

Vibrato is created through variations in width, speed and pressure and varying points of emanation (finger, hand, arm). In classical repertory, pressure is supposedly not a factor, but many string players use far too much finger pressure down into the fingerboard. Excessive pressure precludes variations in vibrato and blocks ease in left-hand articulation, inviting reciprocal pressure from the right hand. As you practise playing scales or melodies without vibrato, take the opportunity to learn how to control finger pressure. Think of placing each finger on the surface of the string and using gravity to allow the finger to sink down to the surface of the fingerboard, only going as far as you need to create a whole tone, and no more.
Julie Lyonn Lieberman, The Strad, January 2006

For a more advanced player, changing a well-established habit of always playing with a fast narrow vibrato to a wider one can be extremely difficult and frustrating because the muscles in the arm and hand usually tense up. The reverse, however, is comparatively easy. Try shaking a small can of fruit juice – either real or imaginary – changing from wide to narrow movements and vice versa and note how much easier it is to go from big to small. Usually the solution for changing an old, undesirable vibrato is to stop vibrating completely and take a new, vastly different approach.
Phyllis Young, The Strad, September 1999

Change in vibrato is easy to achieve since everything about vibrato is based on only a few factors. An adjustment in any one of them will entirely change the overall quality of vibrato:

1.    The part of the fingertip you use – change between a position nearer the tip and one that’s more on the pad.

2.    The heaviness of the finger on the string – change between releasing more and releasing less during the backward movement

3.    The width of the movement – change between wider and narrower widths

4.    The speed of the movement – change between faster and slower movements

5.    The direction of the movement – change between a dotted rhythm (pulsing to the upper pitch of the vibrato) and a more even rhythm in the vibrato movement.

The vexed question of when to use vibrato is a point only to be decided by each one listening to the individual effect of his own playing. I see no harm in its presence at all times if the player has such a perfect control that he can reduce it at will to such a slight movement as to be inconspicuous and emotionless. On the other hand the owner of only one vibrato effect must use his ears and discriminate. An enthusiastic and passionate vibrato at uneventful moments is as seamless as a recitation of the alphabet with intense emotion would be, and equally nauseous.

Saturated with an artistic sense for the really beautiful, mastered by the controlling mind, vibrato becomes a powerful means of expression in the hands of the skilful and patient, well apt to impart the emotions of the player into the tone. It is a matter of taste how much and how often vibrato should be applied. Those who condemn it entirely only admit that they do not feel the music as deeply as those who use it to ennoble the sensuous power of the tone in order to render its message more effective – more convincing.
Emil Krall, The Strad, May 1912

If the period players were serious about their calling they would have a different armoury of vibrato effects for every national style, if not for each composer. Hungarian music would be played with the Hubay school’s wide wah-wah vibrato, for instance, while French music would have quite a silvery finger vibrato, with now and then a spot of right-hand vibrato produced solely with the bow, as Capet used to do. But I am happy if each player come before me on the concert platform with his or her own painstakingly developed range of vibrato styles. I am also at ease with constant vibrato.
Tully Potter, The Strad, October 2009

‘Heinrich Schiff taught me that non-vibrato can be a wonderful addition to our tonal palette. The ethereal first phrase of Beethoven’s Cello Sonata no.4 should be played with absolutely no vibrato. According to Schiff, ‘Vibrato on every note is like putting ketchup all over the music.’
Alban Gerhardt, The Strad, February 2011