‘Her Strad sounded like a husky voice with a rich timbre’: composer Solveig Sørbø

Solveig Sørbø reflects on collaborating with string players for her composition ‘Love Theme’, including violinist and dear friend Catharina Chen 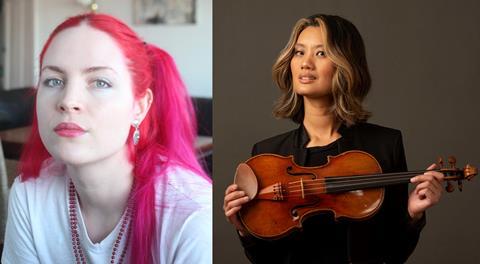 Love Theme was originally written for a documentary film about an elderly couple torn apart by Alzheimer’s disease, and how much they loved each other through a long life. I think a love theme should be singable and close to the voice because in the voice there is so much emotion. I also think that it should contain a hint of sadness representing the fact that nothing lasts forever. In the film version the theme was played on saw and viola, the saw being very passionate and the viola very warm.

Later I happened to meet violinist Arve Tellefsen, who liked the piece and encouraged me to make an arrangement for violin. He also said it would sound more loving if I changed it from 4/4 to 3/4 time signature. I followed his advice and after a few rounds of feedback and some time in isolation, the new chamber version of the piece was ready.

I layered warm cellos (Audun Sandvik), had a guitarist (Petter Richter) play flageolets and a pianist play in a more dynamic way. I tend to think of the different roles of the instruments, e.g. the guitar adds crispness, the cello adds depth and warmth, strings in general add both texture and a floating feel, giving me flexibility.

Read: From page to performance, with the help of the composer

Violinist Catharina Chen actually came in last, but managed to fit into the space given and at the same time turn the piece into her own. When I think of Catharina’s style the word ’electric’ comes to mind, but here her 1723 ’Emiliani, Da Russo’ Stradivari sounded like a husky voice with a rich timbre, as if her soul awakened the 300-year-old instrument. Plenty of passion and brilliance too.

I met Catharina for the first time in Foss, a music high school in Oslo. We didn’t know each other well, but I remember she already had star status back then and played the most virtuosic repertoire in school concerts in Paulus Church. Years later, we met at a small concert I was arranging together with pianist Jie Zhang in the Tuddal valley. I remember Catharina leaning over the buffet holding her violin between her cheek and her shoulder, making us all giggle as it seemed a pretty sloppy treatment of such a valuable instrument! But she had full control, of course.

When I later needed a violinist for my recording I felt I could ask Catharina. She is extremely skilled as a musician, but also a very approachable person - a killer combination! I gave her a score with some annotations on dynamic and mood and told her I thought she should interpret the music her own way, within the context. She told me, ’I didn’t feel like using much bow pressure, which I normally use for an espressive sound - but my instrument has a wide quality of sounds which the microphones in the studio can catch - and the sound of overtones shines through so lovely.’

I don’t control my musicians; if you let people do their thing you get the best result! Catharina’s performance is beyond what I could have imagined, and I really hope it reaches many ears and hearts around the world.

Listen and watch the animated video to ’Love Theme’ here: