2
Bringing the Suzuki Method to the UK
Playing Hub

Bringing the Suzuki Method to the UK

In the 1960s and 70s, the Suzuki Method was already making waves around the world. Caroline Heslop writes about Helen Brunner’s challenge to bring the teaching method to the UK, in this extract from September 2000. 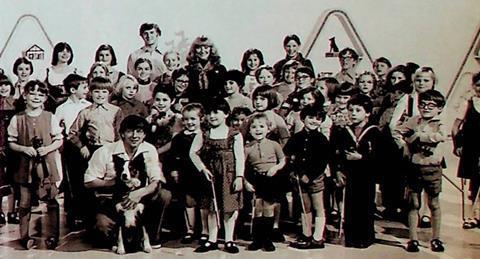 One of Brunner’s most famous pupils, Katharine Gowers (second from the right), was one of a group who appeared on the popular BBC children’s television show Blue Peter in the late 1970s

This extract is taken from the article ’Suzuki’s ambassador: Helen Brunner’ which appeared in the September 2000 issue. Click here to read the full article.

When Helen Brunner returned to England at the end of the 60s she decided she must try to bring over some Suzuki teachers. She wrote 200 letters to musical and educational establishments nationwide suggesting that they invite someone from Japan and offering to support the project. She got nothing but silence or negative responses. It was perhaps this frustrating rejection that triggered her sudden intuition while flying to Vienna that she must become a Suzuki teacher herself. Back home, a letter awaited her from the Rural Schools Music Association in Hertfordshire saying that they were interested.

The early 70s saw Brunner living back in west London and tentatively beginning to teach the violin the way she had watched her children being taught in the US. She remembers posting letters through nearby letter-boxes inviting her neighbours and friends to bring their children for her to teach. It all very quickly took fire and at the same time the Hertfordshire experiment was launched. A steering committee was formed which included Gene Sadler, Sheila Nelson, Gertrude Collins, Lady Redcliffe Maude and Brunner herself.

With money from the Gulbenkian Foundation and the Leverhulme Trust they were able to invite two American Suzuki teachers, William Starr and John Kendall, to offer training to music teachers in the county’s schools and to monitor the experiment. It lasted for four years. Brunner acknowledges that it wasn’t a complete success because not enough teachers were prepared to commit themselves, but for her it was wonderful; for the first time she had Suzuki-trained teachers on hand, living in her house and teaching her more and more about the Suzuki approach. Soon after, in 1974. one of Suzuki’s own students came to live with her.

Brunner continues the same active schedule she has led all her life, which invariably includes teaching from seven in the morning. She plays with the Meridian Quartet and is planning to study for a fellowship diploma. In addition to her teaching in London, she travels all over the world training teachers for the British Suzuki Institute. Brunner gives her students enormously varied opportunities for performing. Jenny Stokes recalls how aged nine or ten, she and her group performed Autumn from the Four Seasons in Scotland, with Suzuki in the audience. Apparently he watched their vibrant and confident performance and said, ’Those must be Helen Brunner’s pupils.’

The training of teachers is crucial to the success of the Suzuki method. Although Suzuki’s approach is recorded in eight violin books of repertoire, there is nothing in the books that tells you how to teach them until you have trained as a teacher; you won’t know which place in the book to introduce vibrato,  to teach how to lift the bow or to learn a new finger pattern. As Brunner says of the books, ’they are like ’hangers upon which we attach the technique.’

Brunner has a strong link to the British Suzuki Institute, which offers training and support to all Suzuki-trained teachers. It was Suzuki’s vision that all his teachers and pupils were part of his family. This vision continues. Brunner not only views her relationship with her pupils as like that of a family but finds a consensus among Suzuki teachers. In London, for example, they are agreed that they use the Suzuki music but that they supplement it. ‘We all chop and change a bit and leave things out in the later books and supplement with material of our own choosing,’ she says.