In this extract from the September 2021 issue, Samara Ginsberg examines common misunderstandings and myths in the Suzuki Method related to sightreading, parental involvement, racism and social issues 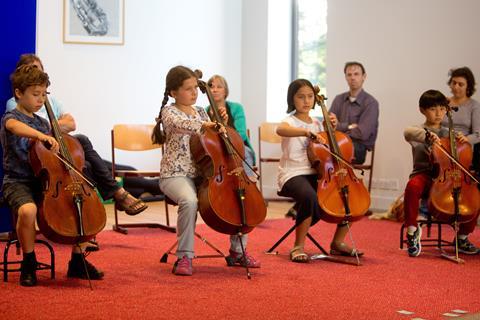 A group cello performance at the LSG’s Bryanston course

The following extract is from The Strad’s September 2021 issue feature ‘Suzuki Teaching: Every child can’. To read it in full, click here to subscribe and login. The September 2021 digital magazine and print edition are on sale now

Learning by ear is perhaps the most widely known cornerstone of the Suzuki Method. Critics say that delaying reading produces weak sightreaders. Many teachers acknowledge that for a time in the early days, Suzuki tuition in the West did produce weak readers, thanks to a combination of misunderstandings. Kate Conway says that Suzuki children ought to learn to read music at the age at which they learn to read their language, but that the advanced technical ability of some of Suzuki’s very young students led Western teachers to the mistaken conclusion that reading shouldn’t be introduced until attaining a certain level of proficiency. Kimberley Wong adds: ‘Japanese children were learning to read music in school. It wasn’t that he wasn’t teaching them to read music; it’s just that he didn’t have to. That got a bit lost in translation in the first round of it coming to the West. It’s definitely something that has improved a lot in the last 20 years.’

The focus on starting very young and the heavy emphasis on parental involvement have generated an association with pushy parenting, but teachers insist that this is not the case. Another common criticism is that the method produces students who play like automatons. It hasn’t escaped the notice of Bergman that these criticisms are congruent with stereotypes associated with Asian musicians:

‘Dr Suzuki would bring these groups of young Japanese musicians over to the States and they would play these recitals. I remember going to a couple of them – these amazing eight-year-olds playing Fiocco’s Allegro together at top speed in perfect unison. And you would literally hear white parents saying, “Yeah, it’s impressive, but they’re robots. They don’t really have a musical soul.” But they were playing together!

‘I don’t have a single Asian colleague who hasn’t been told at some point that they played robotically, or who hasn’t had it assumed that their parents were pushing them. There are pushy parents in every part of the music world. That’s hardly a Suzuki thing. It’s undeniable that part of the backlash to Suzuki in this country has been based in racism.’

The last few years have seen an increasing focus on social justice both in the arts and in wider settings. The core Suzuki belief that all children have innate aptitude seems aligned with these values. However, instrumental lessons are often seen as a conspicuously middle-class activity, both for economic and cultural reasons. Conway has given this a lot of thought: ‘Dr Suzuki’s first principle that every child can learn to be talented is inherently democratic. It is a very equitable philosophy. Every Suzuki teacher will tell you every child can learn to be talented. And then if you ask them why their students tend to be from white, upper middle-class families, they will say, “Well, I’ve just taken whoever’s been interested, and then they’ve told their friends.”’

Conway has worked to get around this by running Suzuki Hub as a social enterprise, imposing a Robin Hood tax on wealthier parents in order to subsidise the fees of those in less privileged positions. She says that parents welcome this, as they see the value in their children learning alongside a diverse range of classmates.

Teacher training is different in different countries. In the UK, for example, there is a minimum of three years’ worth of part-time training before becoming accredited. The US takes a less formalised approach with a focus on continuing professional development – the course itself is less rigorous, but teachers are expected to take it repeatedly with different instructors at various stages in their career.