How to play on gut strings for the first time

As a violinist with only modern training, exploring the sound world of gut strings was a daunting yet exciting proposition for Francisco Fullana. Here he gives guidance on how to start and what to keep in mind 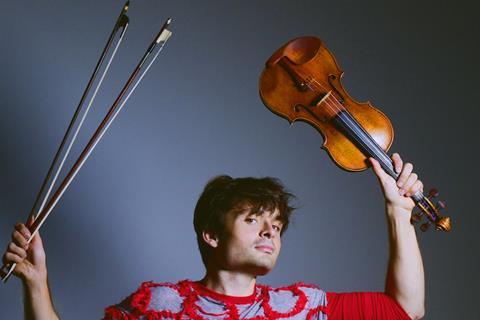 As a young violinist from Mallorca, Spain, I came to New York City at age 16 without knowing much about period playing, gut strings or what 415 HZ meant. But I did know one thing: I loved playing Bach. While at Juilliard, I loved the freedom in the sound and the creativity from the ornaments used by my colleagues at the Juilliard 415 program. But the idea of playing that way myself seemed so daunting to me. Don’t gut strings go out of tune all the time? Isn’t period playing about never vibrating and playing quietly? So many myths that made me wary… I was trained purely as a modern violinist and as I went through my education, I developed one obsession: finding ways to adapt my technique and sound to each composer’s sonic world. With each performance of a Bach Partita or Vivaldi’s Four Seasons, I realized I needed to make bigger changes to get closer to that ideal. I hope that with this simple guide, violinists who are curious about period playing start dipping their toes without feeling the need to invest into a separate violin with a full traditional baroque setup.

● Strings: What strings are you currently using? Have you ever tried gut wound strings, such as Pirastro’s Passione or the traditional Oliv? Over the past century, string technology has advanced tremendously with strings that are wound gut yet keep a stable pitch. For those violinists living in extreme weather, Pirastro’s Obligato strings bring a lot of the same qualities while having a synthetic core for added tuning stability. And for the ones with overly bright instruments, Eudoxa strings will give you the mellowest sound. The next step is to start using open gut strings, made out of sheep or lamb gut. Whether you decide to only change the E string or also the A or even D strings, I highly recommend experimenting with different gauges. Two of the biggest manufacturers of high quality gut strings are Gamut and Aquila strings, with E string gauges that range between 0.52 and 0.66mm. Thinner strings will be brighter but the sound breaks easily under pressure. Thicker strings work with those players who are more physical with their bow arms. Whichever one works best for you, stick with unvarnished strings for the best baroque sound.

● Bow: Are you looking for rounder and more resonant chords when you are practicing one of Bach’s challenging fugues? I would begin holding your usual bow higher, resting your thumb on the leather pad. Once you feel comfortable with this new balance, give a baroque bow a try. The bow model that we think of today as standard wasn’t invented until the late 1780s by François Tourte. Baroque bows are around 20% lighter and are cambered slightly outwards. In terms of length, early Baroque bows are usually shorter than bows from the mid-18 th century. You can find modern replicas at your local archetier (bow maker) for an affordable price.

Read Bruno Philippe on the attraction of gut strings

● Embrace the unevenness!: Baroque bows were constructed to produce a bigger sound on down bows, and composers knew that! Whether using a baroque or holding a modern bow higher, use that asymmetry to your advantage! Now you can be more physical with the strokes in big downbeats yet still beautiful. Really go for it when there’s a chord that you want to highlight!

● For Bach (and most German Baroque music) only: 415 hz tuning. This A pitch is the generally accepted frequency for German baroque playing (about a half step below a modern concert A 440). It is based on measurements of an 18th century tuning fork in Dresden’s chief Roman Catholic Church and organs constructed during Bach’s life. Pitch varied tremendously from city to city, including an incredibly high 465HZ A in 17 th century Venice! Ornaments

● Ornamentation in the 17th and 18th centuries, the art of adding or changing notes to a musical work, was common and expected among performers, especially during the repeated sections of a piece. But how do performers execute it successfully? Start by finding different musical ideas that might fit the piece, maybe a different dynamic or an alternative point where a musical phrase culminates. As a second step, find places where a simple upwards turn or trill is appropriate. To add drama and virtuosity, I especially love step-wise runs within a big leap and appoggiaturas on certain resolutions. Whichever ones you choose, make sure to practice them hard so they are as convincing as the rest of the piece!

● Ornament ‘Menu’: Once you are comfortable with these additions, I highly encourage you to think of ornaments as a sort of menu at a restaurant. Try to explore every option possible during your practice, so you can choose from the ‘menu’ when you are performing. I aim for having explored enough of them so I am only playing about 1 in 4 on any given performance. You will find yourself doing some of your favorite ones almost every time, and that is ok too!

● Get inspired: Listening to singers who specialize in Baroque operas is a great way to realize the immense possibilities of ornamentation while staying true to the composer’s style. Exploring the sound of gut strings and Baroque music shouldn’t be scary. I hope this guide helps you take that first step, realizing it is accessible and fascinating. Even if you end up deciding it might not be for you, dipping your toes into the world of period performance practice will only help you understand the music of the 17 th and 18 th century better. My advice to those violinists who are curious about playing Baroque music in a more period appropriate way is to listen to a lot of great recordings and try things out with the equipment available to you. Music making is a lifelong journey that should always be driven by curiosity. Fortunately, we have all the tools to feed that curiosity at our fingertips: from streaming platforms to online stores for strings and even period bows, I invite every violinist out there to explore and take these first steps, ones that opened my eyes to a whole new approach to playing some of the finest music ever written.

Fullana has a new album of solo violin repertoire coming out in late May, for which he performs on both on baroque and modern set-ups. For more information, see here: https://www.orchidclassics.com/releases/fullanabach/