An introduction to the medieval fiddle

What is a medieval fiddle and how does it differ from a Baroque or modern violin? Stevie Wishart explains its anatomy, tuning and stylistic uses 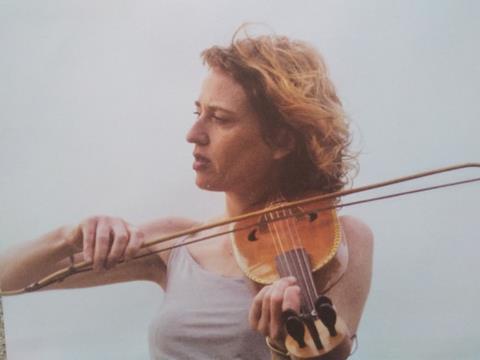 The general impression gained from historical information is that the medieval fiddle displayed little standardisation. It varies in size from small treble instruments, to more frequently depicted alto instruments, and occasionally larger instruments. There are also a variety of shapes – octoform with single or double waists, oval, bottle-shaped, piriform and waisted, all with necks of varying length. Its strings usually number four or five (although again this is very variable), and often appear to extend from lateral, posterial, or frontal pegs over a simple yoke-like bridge, and there is usually a tailpiece. Perhaps the most significant aspect determining the sound and playing techniques is the bridge, which is usually quite low with a flattish upper surface over which the strings are supported.

Medieval fiddle and baroque violin share similarities such as having neither a chin rest nor a shoulder rest. They also differ from the modern violin by the angle of their neck, since it remains more-or-less parallel with the soundboard while a modern violin’s neck is more at angle in order to support greater tension. Nowadays, modern violins use four metallic[1] strings, and baroque violins are usually strung with gut E, A and D strings, and either a plain gut G or a metal-wound gut G.

Read: How to play on gut strings for the first time

As gut strings are organic, their structure offers a rich, complex sound allowing more overtones than synthetic strings. Steel or nylon string will provide a pure or direct sound that has to be coloured by the musician.

With the medieval fiddle, I tend to use all gut to linger in the timbre and appreciate its nuances. In recent years the copper-weighted gut strings by Aquila have been a welcome addition.

The bow design is also a crucial aspect of playing the medieval fiddle. For the more drone-based[2] pieces, it is often useful to slacken the tension of the bow hair, or use a more arched bow so that it is easier to bow multiple strings. The bow is as important as the instrument itself: a different type of bow will generate another sound. Baroque bows are straighter than modern bows, their stick stays stiffer and can provide almost a spoken quality, whereas modern bows tend to bend with pressure and are designed to sustain longer melodic lines.

Nevertheless, the medieval fiddle seems to have had a very different musical function to bowed instruments of the Renaissance and beyond. Its documented tunings tend to support the idea that the sound was not aimed at producing a smoothly consistent and singular melodic line throughout its range. Becoming increasingly familiar with both its historical profile and repertory, I am more and more convinced that the medieval fiddle works best as a soloistic instrument, with the facility for self-accompaniment through more or less intermittent drones.

What really made this instrument come into its own was Jerome of Moravia’s Tractatus de Musica, Paris c.1280. Christopher Page gave me a copy of his translation and I subsequently experimented with all three of Jerome’s tunings. The first uses a re-entrant fifth string as a lateral drone, which as on the crwth (an ancient Celtic instrument that is similar to a violin) runs of the side of the neck so that it can be bowed or plucked as an open string.

With the other two tunings, all five strings can be fingered and Jerome emphasises one particular tuning as necessary for ’secular songs and for all others, especially irregular ones which run through the whole hand.’ What is so great about this tuning is that it is concordant with the open strings forming a harmonious chord of 4th, 5th and octaves. This tuning has remained a personal favourite, as it seems absolutely ideal for all of the available repertory.

Medieval and baroque music bestowed a certain kind of freedom upon the performers: to develop musical content within the given template of the composition while maintaining the integrity of the work. For example, improvisation would have been an intrinsic and highly-prized aspect of medieval fiddle playing but many improvised elements such as intermittent drones would not only be problematic to notate, but be considered unnecessary to make explicit. 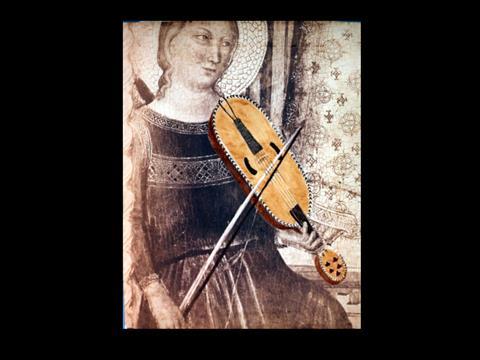 As I do think of medieval fiddles having a dull-rich timbre, it may have oriented my choice to contribute with a response piece for Bach’s Brandenburg Concerto No.6 (written for two viole da braccio, two viole da gamba, cello, violone and harpsichord) during Music@Malling’s Six Brandenburg: Six Commissions programme this year. On 23 April, Chamber Domaine will perform the complete Brandenburg Concertos alongside six new works, among which is “Gold and Precious Silver”. The St Eanswythe Respond ‘Aurum tuum et argentum pretiosum’ was composed in 2007 by the Malling Abbey’s Choir Mistress. It is very important for me to make my compositions evolve from the time and place associated with the commission - if that time and place are special. And West Malling definitely is. Who knows whether the medieval fiddle was heard there?

[1] Metal wound around the string core that can be made of gut, steel, or synthetic polymers.

[2] In music, a drone is a continuous unchanging note played above or below the melody, the drone and melody together called biphony. Drones were a significant part of medieval instrumentation. See Pittaway, I. 2018 Performing medieval music. Part 2/3: Turning monophony into polyphony, https://tinyurl.com/Pittaway2018