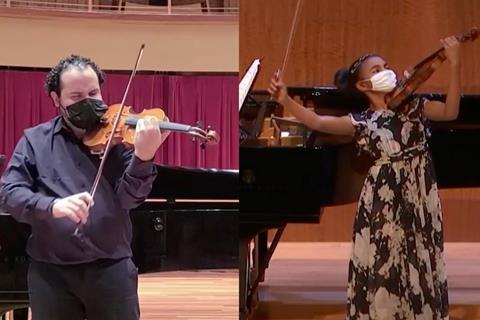 The annual Sphinx competition, which honours young black and Latinx classical string players, has announced the winners of this year’s Senior and Junior Divisions.

The winner of the Senior Division (ages 18 to 30) is the 24-year-old Venezuelan born violinist Samuel Abraham Vargas Teixeira. He receives the $50,000 Robert Frederick Smith Prize, and several prestigious solo engagements with major orchestras.

The winner of the Junior Division (17 and under) is the 12-year-old Californian violinist Amaryn Olmeda, who receives a $10,000 cash prize, as well as solo engagements with major orchestras.

Awards were determined by audience members texting in their votes. The Finals Concert was streamed on Saturday, 30 January. It is now available to replay on-demand on Sphinx’s website and will air again on DPTV on 22 February 2021.

‘I want to congratulate all of our artists who participated in our first ever virtual Sphinx Competition!’ said President and Artistic Director Afa S. Dworkin. ‘I continue to be deeply moved by the astounding talent and admirable citizenship among our artists. You inspire us with your artistic excellence and resilience! We greatly look forward to helping to empower your careers as you transform lives through the power of your artistry!’

Sphinx was founded in 1997 by Aaron P. Dworkin with the goal of addressing the underrepresentation of people of colour in classical music.