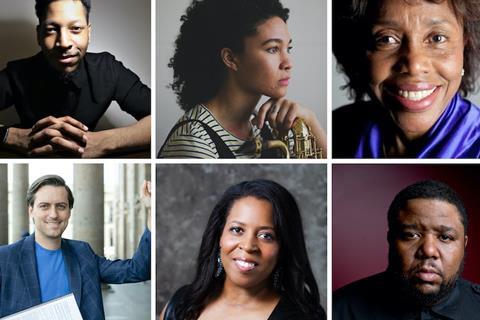 As part of New Music USA’s Amplifying Voices programme, six composers of colour have been commissioned to write new orchestral works to be performed by 24 orchestras during the 2021-22 season.

They are Valerie Coleman, Juan Pablo Contreras, Tania León, Brian Raphael Nabors, Tyshawn Sorey, and Shelley Washington. Each of the six composer’s pieces will be performed by a minimum of four orchestras.

Leadership at each orchestra will also work with their partner composer to increase the programming of works in their mainstream seasons by composers of all generations whose voices have not been represented in orchestral programming.

According to the Institute for Composer Diversity’s analysis of 120 American orchestras’ 2019-2020 plans, 94% of music programmed for that season’s mainstage orchestral concerts was written by white composers. Amplifying Voices aims to make strides in transforming the classical canon.

One of the commissioned composers, Shelley Washington, says, ‘I am so thrilled to be working with the Los Angeles Chamber Orchestra to write a new piece for them and other orchestras. Having the time and resources to create a large piece for the orchestra is rare in the modern classical world, especially for younger composers. In addition to writing the piece, I am looking forward to sitting down with the orchestra to open up a dialogue on what changes can be made to create a more inclusive space in the orchestral classical realm.’

Juan Pablo Contreras says ‘One of my missions as a composer is to invite musicians and listeners from all backgrounds to feel more included and represented in the beautiful genre that is classical music. I’m extremely honored to be a part of New Music USA’s ”Amplifying Voices” programme, and collaborate with a consortium of American orchestras led by the Las Vegas Philharmonic, to write a new work that will further this mission. My composition will tell a story describing the ”edge effect” that occurs in communities that are on the border shared between the United States and Mexico.’

Vanessa Reed, President and CEO of New Music USA, says, ‘We created Amplifying Voices at the end of last year to support the programming of composers and repertoire that could and should be more regularly enhancing our experience of orchestral music. Congratulations to the orchestras and composers who’ve been selected for this unique initiative – I can’t wait to hear their new pieces that result from these collaborations as we strive towards an open and equitable future for classical music.’