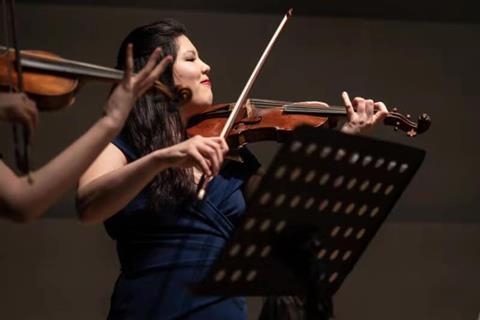 Baroque violinist Rachell Ellen Wong has become the first period performance artist to receive an Avery Fisher Career Grant. The announcement of the awardees was made on 25 March on-air, and the other recipients were named as violinist Stella Chen and cellist Zlatomir Fung. Each receives $25,000 to put towards furthering their careers.

The announcement was made on the New York classical music radio station WQXR in a programme that featured previously recorded performances by all 2020 recipients. It will be rebroadcast on Saturday 28 March at 7:00 PM EST on WQXR 105.9 FM and streamed at  www.wqxr.org.

Wong, whose career is divided between historical performance practice on her Tielke baroque violin, and contemporary performance on her Carlo de March violin, has played with ensembles in the performance-practice arena including the American Bach Soloists, the Academy of Ancient Music, Bach Collegium Japan and Les Arts Florissants. With her modern instrument she has performed as a soloist with such orchestras as Orquesta Sinfónica Nacional de Panamá and Seattle Symphony.

She is a founding member of New Amsterdam Consort, a New York-based period-instrument string ensemble comprising Juilliard graduates specialising in one-to-a-part performances of music from the Renaissance through to the high Baroque. With keyboardist David Belkovski she co-founded Dioscuri, an ensemble focusing on music from all periods played on historical instruments.

Violinist Stella Chen, who was recently announced as a Chamber Music Society of Lincoln Center The Bowers Program artist, is the first prize winner at the 2019 Queen Elisabeth International Violin Competition. During the 2019-2020 she was scheduled to make her debut performances at the Kronberg Academy, Ravinia Festival, the Salzburg Mozarteum, and in Istanbul, and perform concertos with the Luxembourg Philharmonia, the Changwon City Orchestra, the Ewha Philharmonic Orchestra, and at Alice Tully Hall with The Juilliard Orchestra in Jörg Widmann’s Concerto no.2, conducted by the composer.

Cellist Zlatomir Fung is the youngest winner of the International Tchaikovsky Competition Cello Division, and received first prize at the Schoenfeld and Enescu International Cello competitions.  In the 2019/20 season he has performed with orchestra and in recital across North America; as a chamber musician he performed with IMS Prussia Cove on tour, opening the season at London’s Wigmore Hall and closing at Dresdner Musikfestspiele. He studies at The Juilliard School with Richard Aaron and Timothy Eddy and plays a W.E. Hill and Sons cello from 1905.

Avery Fisher (1906-1994) was an amateur violinist and lifelong benefactor of classical music, who was committed to nurturing performers. The Avery Fisher Career Grant, which he founded, awards up to five outstanding instrumentalists each year (since 2004, chamber music groups are also eligible). Recipients must be US citizens or permanent US residents; previous awardees include pianists Yuja Wang and Jeremy Denk, and the Jack Quartet.

‘Musicians of outstanding ability are such an important part of our culture. But they are like flowers that must bloom at a particular time. They have to be helped at the right moments…’ — Avery Fisher.