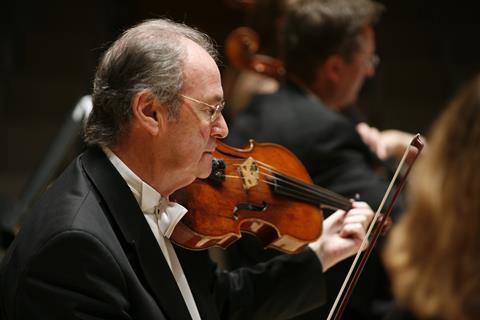 Irish viola player Tony Byrne died on 2 December, following a long illness. He was a long-standing member of the London Philharmonic Orchestra viola section from 1974 until his retirement in 2010, during which he served for many years as co-principal.

Byrne was born and raised in Dublin, where he studied the violin, but switched to the viola in order to make up a chamber group. Falling in love with the instrument immediately, he was offered a scholarship at the College of Music in Dublin. He joined the Symphony Orchestra of the Irish Radio following his studies and was also a founder member of the Irish Chamber Orchestra. He left Dublin in 1965 to join the BBC Orchestra in Bristol and later spent seven years with the Bournemouth Sinfonietta as principal viola.

He joined the LPO in 1974, playing as co-principal viola until 2006, stepping down to become a member of the section, until his retirement in 2010. Fellow LPO violist and friend Kate Leek said, ’We have lost one of the loveliest and most generous-spirited of colleagues. He was passionate about the music, loved playing chamber music, and practised every spare moment on his beautiful old Italian viola. His wife Christine once said that he felt guilty if he didn’t practise on Christmas Day!’

LPO Leader Pieter Schoeman added: ‘Tony was a gentleman. He was also one of the kindest people I’ve ever known. During those early years when I started playing with the LPO, he very quickly became one of my best friends. Some of my favourite moments were the meals we had after concerts on tour, because Tony had the ability to always lift my spirits with his humour.’