Two cellists and a violinist are Windsor Festival Competition finalists

Jamal Aliyev, Jonathan Swensen and Mathilde Milwidsky will perform in tomorrow’s final, held in the Waterloo Chamber of Windsor Castle 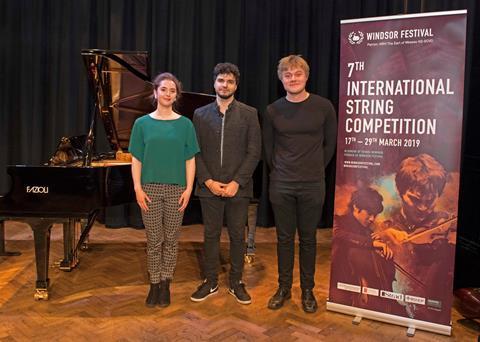 The Windsor Festival International String Competition has named its three finalists. They are:

All three have previously featured in The Strad, with Swensen winning the Khachaturian International Competition, Aliyev winning the Musicians’ Company Prince’s Prize, and Mathilde Milwidsky reaching the semi-finals of the Joseph Joachim Competition.

The final will take place tomorrow, Friday 29 March, in the Waterloo Chamber of Windsor Castle. The winner will return to the same venue for a concert on 18 September 2019 with the Philharmonia Orchestra as part of the 50th Windsor Festival.

The first prize also includes a £5,000 cash award, a contemporary bow to the value of £5,000 from Bishop Instruments & Bows, and a solo recording on Champs Hill Records, as well as further performance opportunities.