Cellists from around the world descended on the Armenian capital in June for the Khachaturian International Competition. Tom Stewart reports from its thought-provoking final round 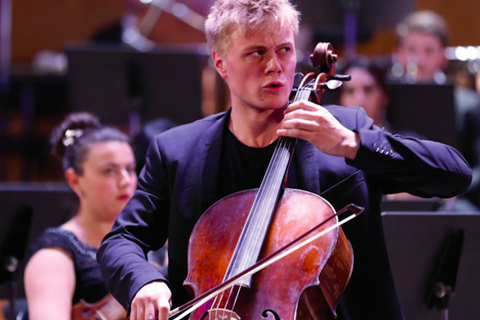 Its streets of pink stone thronged with vines and shaded by trees, Yerevan sits at the foot of Mount Ararat, an extinct volcano more than 5,000 metres tall and the supposed resting place of Noah’s Ark. Although the mountain was lost to Turkey shortly after the infamous genocide of 1918, Ararat’s distinctive shape is depicted on the stamp added to travellers’ passports at the border. Armenia is a country proud of its powerful national symbols and – along with Ararat, apricots, the world’s oldest Christian tradition and a unique 39-character alphabet – composer Aram Khachaturian (1903–78) ranks highly among them.

Beyond the ubiquitous Sabre Dance and the Adagio (both from his ballet Gayane) that features on the soundtrack to Stanley Kubrick’s 2001: A Space Odyssey, much of Khachaturian’s output remains obscure to most outside the former USSR. Soviet audiences and censors alike appreciated its synthesis of Armenian folk elements and muscular Socialist realism, but others dismissed the composer as a puppet apologist for Stalinist cultural policy. His conservatism has been reassessed in recent years, however, with the composer likened to a kind of Vaughan Williams of the Caucasus.

Now in its 14th year, the Khachaturian International Competition is a celebration of the composer’s work, open to violinists, cellists, pianists, singers and conductors on a rotating five-year schedule. The four finalists in this year’s competition – for cello – had been selected from sixteen in the first round (reduced to eight in the second) and played either Khachaturian’s Cello Concerto or his single-movement Concerto-Rhapsody in Yerevan’s aptly named Aram Khachaturian Concert Hall. Sergey Smbatyan conducted the  Armenian State Symphony Orchestra, a group that evolved just over a decade ago from the State Youth Orchestra of Armenia and which now acts as an ambassador across Europe for the country’s unjustly overlooked classical music culture.

Khachaturian’s conservatism has been reassessed in recent years

First among the finalists was 30-year-old Russian Fedor Amosov. After the 23-minute Concerto-Rhapsody’s orchestral introduction – a serpentine melody that emerges from a haze of horn calls and staccato cymbal crashes – comes a long solo passage for the cello, with its opening octave leap lent an operatic élan by Amosov’s arresting portamento. In the feverish passagework that followed, the cello sounded like a Heldentenor in the midst of a particularly fraught mad scene. Although a little gloominess or introspection of tone might have helped sustain the drama as Amosov hurtled towards the bottom of his C string, the disparate nature of Khachaturian’s phrases here makes stitching them into  a compelling narrative hard work.

Amosov gave an especially tight and stylish account of the long and lavishly ornamented melody that twists its way through the work’s central and most obviously folk-inspired section. Alongside its ferocious technical demands, the Concerto-Rhapsody’s most challenging aspect is its rather patchwork nature, with abrupt jumps between different ideas. Amosov would have benefited from forming these sentences into paragraphs, even if the finished message still remained elusive. Making the piece sound coherent and satisfying requires a certain pig-headedness from the soloist, and while Amosov’s account was sophisticated and often thrilling, he perhaps allowed himself to become lost among the composer’s obfuscations.

French–Russian Rustem Khamidullin, 29, was the only finalist to choose Khachaturian’s better-known Cello Concerto over the Concerto-Rhapsody showpiece. While the bravura flashiness of the latter must be hard to resist, the former is a more considered and imaginative work that, across its three movements, offers the soloist far greater resources from which to construct a persuasive interpretation.

It is worth noting that the Cello Concerto was written just two years before the publication by the Communist Party of the 1948 Zhdanov Decree, in which Khachaturian was denounced alongside Shostakovich, Prokofiev, Myaskovsky and others for writing ‘anti-popular’ music of ‘excessive individualism’. Shortly afterwards, Khachaturian issued an apology: ‘I want to warn those comrades,’ he wrote, ‘who, like myself, hoped that their music, which is not understood by the people today, would be understood by future generations tomorrow. This is a fatal theory.’

Happily, Khamidullin’s performance embraced the broad arc of the 33-minute Concerto and, in its pacing, demonstrated a mature understanding of the underlying architecture. His sound, for the most part suitably rugged, brightened during pacey, purposeful passages of bariolage in the first movement before recovering its brawn in a descending series of bold multiple-stops. All three movements feature long sections in which a particular pitch is repeated and embellished in the manner of a monodic folk song. These provided opportunities for bold characterisation and transformations of tone that were sometimes missed, especially in the slow second movement. Khamidullin’s elastic detaché and tightly clipped acciaccaturas made for a bounding finale, however, which culminated in a dramatic and impressively well-tuned passage of octaves. 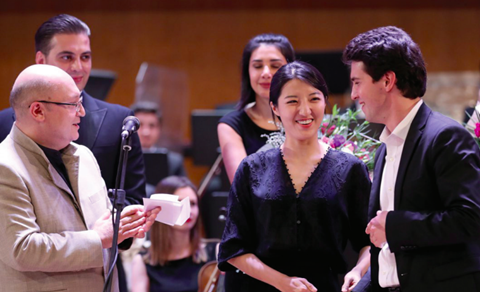 The following evening, South Korean–American Chae Won Hong’s rendition of the Concerto-Rhapsody’s opening cadenza only underlined Khachaturian’s occasional structural idiosyncrasies and the challenges they pose for a lucid performance. That said, while Hong, 27, played with a beautifully stentorian sound in the ornamented strains of ‘Armenian’ melody, detail in the faster passages was often scrappy. And with shaky intonation and a handful of wrong notes, speed here  came very much at the expense of clarity (a recording of the piece by Rostropovich conducted by the composer falls at times into a similar trap). Flashes of deeply thoughtful or strikingly dramatic playing suggested Hong’s technique was, on this occasion at least, getting in her way. Frenetic syncopations in the Concerto-Rhapsody’s final minutes help wrest both soloist and orchestra from any previous dead ends, but Hong struggled to recover sufficiently from her previous lapses of persuasiveness to take full advantage of this reprieve.

Last came Danish 21-year-old Jonathan Swensen. Although his first entry came without the theatre of Amosov’s, the bars that followed signalled an outstanding ability to shift convincingly between the disparate elements that make the opening so challenging. Swensen played with the  same muscular open-heartedness throughout the section, his performance alone making sense of it for the audience. Expertly placed fingers and a supple right arm ensured a smooth transition between sustained lines and passages of explosive spiccato, while Swensen’s obvious rapport with the orchestra and conductor was a testament to the clarity of his ideas and his skill in communicating them. It might just have been because this was its third performance of the piece in two days, but the orchestra sounded by turns more brooding and more brilliant than it had done before. A pizzicato countermelody just before the climax was discreet and polite under Hong’s fingers, whereas Swensen’s strings snapped against his fingerboard and propelled him headlong into the blaring horns.

In the final restatement of the theme, Swensen’s high notes were taut and full of menace, and brought the work to an exhilarating close. No one who had heard all four performances could have been surprised when honorary jury chairman and celebrated Polish composer Krzysztof Penderecki announced that Swensen had won the $15,000 first prize. Second prize, worth $10,000, went to Amosov, with the $5,000 third prize shared between Hong and Khamidullin. After a reprise performance of the Concerto-Rhapsody, Swensen was whisked off to dinner with the competition’s jury and trustees, as well as its patron Nouneh Sarkissian, who sat between the cellist and her husband Armen, the president of Armenia. ‘This is a small country,’ he said, turning to Swenson and raising his glass of apricot vodka, ‘but one that has created many great artists. You will always be welcome in Armenia, as if it were your second home.’