The selected violinists will compete for a top prize of CHF20,000 over three rounds taking place from 18 to 24 as part of the Sion Festival in Switzerland 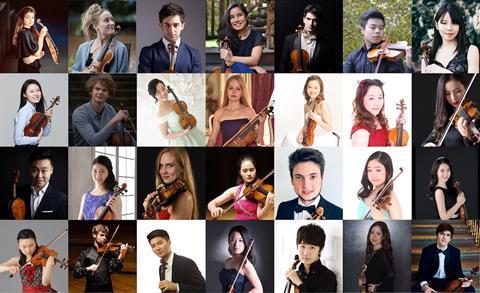 The Tibor Varga International Violin Competition, taking place from 18 to 24 August in as part of the Sion Festival in Switzerland’s Valais region, has named the 28 candidates selected to take part in its live rounds.

Open to international violinists aged under 26, the competition tests performers in recital repertoire and chamber music, and culminates in a final concerto round with the Lausanne Chamber Orchestra conducted by Gábor Takács-Nagy. First prize is CHF20,000 (c. $20,000) plus concert opportunities.

The were chosen by video preselection, playing a Paganini caprice and a Sonata from a prescribed list. The competition requires a solo performance in the first round, violin and piano in the second round, and a two-part final comprising chamber music and concerto with orchestra.

The concerts of the final are incorporated into the Sion Festival programme.