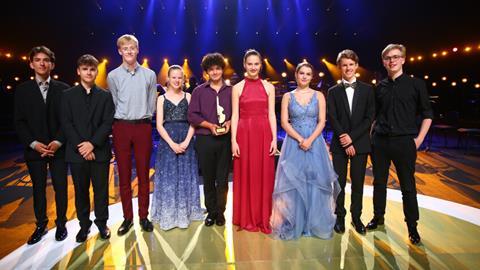 The 2022 edition of the Eurovision Young Musicians competition took place on 23 July in Montpellier, France. Although traditionally held every two years, the competition had a four-year hiatus due to the pandemic, with the last edition taking place in 2018. It was also the first time France hosted the event. The competition is open to classical musicians ages 12–21 and this year included competitors from nine European Broadcasting Union members: Czech Republic, Norway, Germany, Croatia, France, Poland, Austria, Belgium and Sweden. The competition was produced by Morgane Productions for France Télévisions.

The competition, which was originally inspired by the BBC Young Musician of the Year award, was founded in 1982 and first held in Manchester, UK. Since then, it has been hosted by Austria, Germany, Switzerland, Denmark, the Netherlands, Belgium, Poland, Portugal, Norway, and now France. Notable past winners include British cellist Natalie Clein and Lithuanian violinist Julian Rachlin.