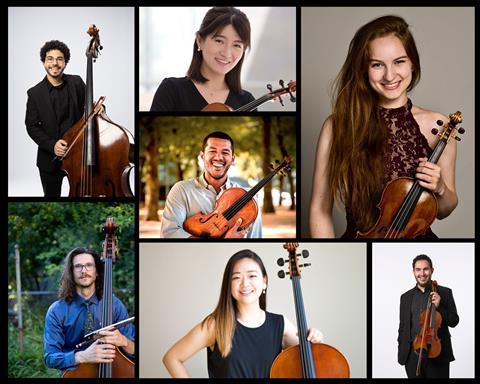 The Cincinnati Symphony Orchestra (CSO) has welcomed eight new string players into its ranks to start this coming 2022-23 season.

‘Each of these musicians won highly competitive auditions, joining the ranks of the exceptional players who make up the CSO,’ president and CEO of the CSO Jonathan Martin said. ‘As we emerge from the onset of the pandemic which halted our auditions for more than a year, this is one strong indicator signalling our return to pre-pandemic level of activity.’

Assistant pricipal bass Stephen Jones has recently graduated from his masters at the University of Cincinnati College-Conservatory of Music. During his studies he worked with James VanDemark, Leigh Mesh and Owen Lee. Joining Jones in the section, Luis Arturo Celis Avila, who also studied with Owen Lee, played with the CSO during his time on the Cincinnati Symphony Orchestra/University of Cincinnati College-Conservatory of Music Diversity Fellowship Programme.

‘Being a part of choosing the next musicians for the CSO is equally humbling and inspiring,’ said CSO’s music director Louis Langrée. ‘Playing in this orchestra attracts musicians of the highest calibre from around the globe, which makes choosing the right musician very challenging. We are thrilled to welcome ten new artists to the orchestra, each of whom will add their talent to the CSO and the Cincinnati community.’

This season will see the orchestra perform at a pre-pandemic level, with 91 performances scheduled between both the CSO and its Pops orchestra. Both orchestras will present free digital livestreams of select performances throughout the season, as part of a continuing commitment to providing broad access to concerts to viewers in Cincinnati and around the globe.

Season highlights include Mahler’s Symphony No. 2 Resurrection, with Langrée leading the CSO and the May Festival Chorus, joined by mezzo-soprano Kelley O’Connor and soprano Joélle Harvey, in the orchestra’s largest production since its 125th anniversary season.

Read: ’Your performance should radiate the colour of real fresh grass. Go to nature and look’ - Yuri Kramarov: A legacy regained