British musician, who performed at the wedding of the Duke and Duchess of Sussex, describes the news as ‘amazing’ 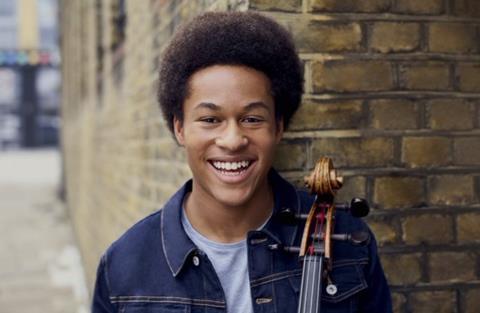 Cellist Sheku Kanneh-Mason has been named a Member of the Order of the British Empire (MBE) for services to music in Britain’s 2020 New Year’s Honours list.

The 21-year-old musician thanked his parents and the ‘incredible’ support of the state schools he attended, and pledged his commitment to help young people of all backgrounds to benefit from music.

‘To be awarded the MBE for services to music is amazing,’ he said in a statement. ‘I was so lucky to have the dedicated support of my parents in giving me the opportunity to have specialist music lessons from a young child. I also had incredible support from the state schools I attended in Nottingham where music was promoted for its value in developing listening skills, teamwork, self-expression and hard work.

‘The love and enjoyment for this great art is something that should be available to everyone, regardless of background. I am committed to continuing my work with organisations such as London Music Masters and Future Talent to reinforce the benefits of access to music for all young people.’

Kanneh-Mason was 17 years old when, as a student Ben Davies at the Junior Royal Academy of Music, he won the BBC Young Musician competition in 2016. Two years later his debut recording, Inspiration, featuring Shostakovich’s Cello Concerto no.1 and other works, became one of the biggest-selling classical music albums that year, following his televised performance at the wedding of Prince Harry and Meghan Markle.

In 2017 he made his BBC Proms debut as soloist with the Chineke! Orchestra, and in August 2019 he returned to the Proms to perform Elgar’s Cello Concerto with the City of Birmingham Symphony Orchestra, conducted by Mirga Gražinytė-Tyla. His recording of the work, with Simon Rattle and the London Symphony Orchestra, will be released in January.

Interviewed by The Strad for the March 2019 issue cover feature, Kanneh-Mason described his early affinity for the cello, and the supportive environment that helped him to quickly progress: ‘I think I’ve always loved it, maybe because of the musical environment I was in. I was always being inspired by amazing musicians and friends who played instruments.’ He has spoken out in the past against funding cuts in Britain’s state schools for music lessons, and last year donated £3,000 - matched by a further £3,000 from his record label Decca - to help fund music tuition. Earlier this year he and his sister, pianist Isata Kanneh-Mason, gave a schools-only performance to children in Birmingham.

Also named in the New Year’s Honours list is the broadcaster and biographer Humphrey Burton, who received a CBE (Commander of the British Empire) for services to classical music, the arts and media. Burton is the author of Menuhin: A Life (2000), and was interviewed for The Strad’s May 2016 Menuhin Centenary issue.