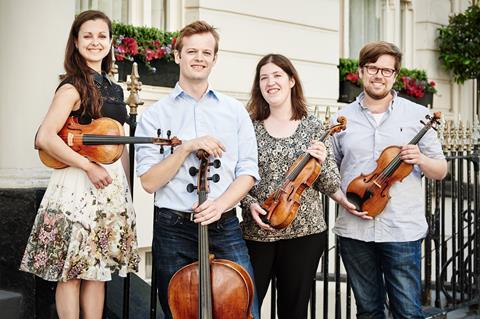 British cellist Sheku Kanneh-Mason and the London-based Castalian Quartet have been selected for the Young Artists category shortlist at the Royal Philharmonic Society’s (RPS) 2019 Awards, this year celebrating its 30th anniversary.

Kanneh-Mason previously received the RPS-Duet Prize for promising young players in 2016, shortly before he won BBC Young Musician. The Castalian Quartet, which formed in 2011, won first prizes at the 2016 Banff International String Quartet Competition and the first Merito String Quartet Award/Valentin Erben Prize in 2018. They are also recipients of a Borletti-Buitoni Trust Fellowship Award in 2018.

In the Instrumentalist category violinist Alina Ibragimova and cellist Jean-Guihen Queyras are among the shortlisted nominees.

The RPS Awards aim to ‘celebrate the outstanding, the pioneering and the inspirational in classical music’ in the UK. Alongside the instrumentalist and composer categories are awards for initiatives that encourage and enable music-making to underserved sections of society, including the Bournemouth Symphony’s Resound for disabled musicians; British Paraorchestra, a professional ensemble of disabled musicians, and Bath Philharmonia’s Empowering Young Carers. For 2019 the Society will also present a new Gamechanger Award ’for an individual, group or organisation who has done inspirational work breaking new ground in classical music.’

The RPS Awards winners will be announced on Thursday 28 November, held for the first time at Battersea Arts Centre in London and presented in association with BBC Radio 3.