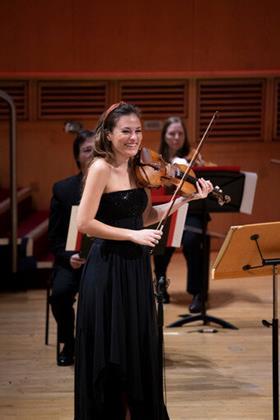 Nicola Benedetti has been annouced director designate of the Edinburgh International Festival and will become festival director on 1 October, 2022. Not only will she be the first female, she is also the first Scottish person to take up the role since the beginning of the festival in 1947.

She said, ’I am deeply honoured to contribute to the long and rich history of the Edinburgh International Festival and the cultural landscape of Scotland. This festival was founded on principles of reconciliation and the ideals of art transcending political and cultural fracture.

’Following in the footsteps of the wonderful achievements of Fergus Linehan and his predecessors, I will uphold these values and greatly look forward to serving this festival, its mission of cultural exchanges, and the people of Scotland.’

Winner of BBC Young Musician in 2004, Benedetti has since enjoyed a successful international career as a violinist, educator and arts and culture advocate.  Benedetti was appointed a Commander of the Order of the British Empire (CBE) in 2019. She heads the Benedetti Foundation, a transformative music education initiative that has worked with over 29,000 participants worldwide with in-person workshops and online sessions.

Recent accolades include winning a Grammy Award in 2020 for Best Classical Instrumental Solo for her performance of Wynton Marsalis’s Violin Concerto, as well as a the RPS Instrumentalist Award in 2021. She formed the Benedetti Baroque Orchestra in 2020 from a collective of freelance period-instrument musicians, with whom she released the album Baroque on Decca Classics.