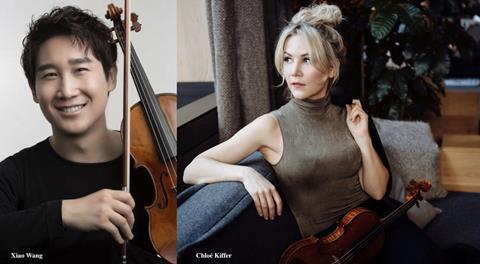 ’Chloé and Xiao are wonderful new additions to our impressive and inspiring strings faculty at MSM,’ said department chair Nicholas Mann. ’These two newest faculty appointments, in addition to other recent additions to the department, such as Eugene Drucker and Ilmar Gavilán, are building on a tradition of excellence that runs deep in this institution.’

Read: The value of good tools: Instruments of the Emerson Quartet

Chloé Kiffer is a soloist and orchestral and chamber musician who has performed around the world and throughout the US. She earned her master’s degree and professional studies certificate from MSM. Earlier in 2022, Kiffer joined the faculty at University of North Texas (UNT) College of Music

Both Wang and Kiffer are already members of the MSM Precollege Division faculty and will assume their new teaching duties with the college at the start of the autumn 2023 semester.

In addition to these and other  faculty appointments, longtime concertmaster of the Met Opera Orchestra David Chan assumed the mantle of leadership of MSM’s graduate programme in orchestral performance; the programme, which was formerly chaired by Glenn Dicterow, is the first accredited degree programme of its kind in the United States and recently celebrated its 30th anniversary.

Read: 12 words of wisdom on practice and performance by Burton Kaplan