Pappano will take over from Sir Simon Rattle, who steps down from the role in 2023 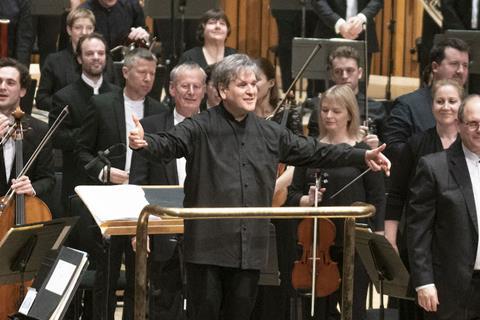 Sir Antonio Pappano with the LSO

The London Symphony Orchestra (LSO) has announced that Sir Antonio Pappano has been appointed as its Chief Conductor from September 2024. Pappano, who will take over the role from Sir Simon Rattle, becomes Chief Conductor Designate in September 2023. He steps down from his post as Music Director of Royal House at the end July 2024.

On Pappano’s appointment Kathryn McDowell, Managing Director of the LSO, said: ‘I am delighted to welcome Sir Antonio Pappano as Chief Conductor of the LSO. We are deepening our association with him at a crucial time of rebuilding and refocussing following the challenges of the pandemic. With Tony, every concert performance is a memorable and special event. He is the dynamic life force that the LSO welcomes in the leading conductor role and I look forward to planning imaginative programmes with him for the LSO’s season in the Barbican and beyond.  With his considerable gifts as communicator off the podium, on film and audio broadcast, we will be developing new digital and broadcast projects tapping into his well-established credentials in this sphere. These will extend to young people through the LSO’s renowned LSO Discovery learning and community programme.’

Sir Antonio Pappano said: ‘Since I first collaborated with the LSO in 1996 I have time and again been overwhelmed by the team spirit inherent in this fabulously talented group of musicians. The combination of a unique energy, flair and virtuosity has always set this orchestra apart. That I have been chosen as Chief Conductor is a dream come true and a most wonderful gift. I am humbled and excited to receive this honour and trust. I am committed to keeping London as my musical home and look forward to this most important journey that awaits me, full not only of discovery but also of continued exploration of technological and broadcast opportunities to convey the message of music to an ever greater audience.’

David Alberman, Chair of the LSO, added: ‘On behalf of the whole Orchestra I am delighted to welcome our new Chief Conductor Designate. We have enjoyed great music making with Tony over the years.  Most recently the unforgettable performances of Vaughan Williams’ Symphonies 4 and 6 last season, the latter on the eve of the first lockdown, the heightened atmosphere in the hall between audience, conductor and musicians was palpable. With the memory of this still fresh my mind I look forward with tremendous anticipation to what the future holds for our audiences and ourselves.’

Over the last two decades, Pappano has conducted over 70 LSO concerts and  made three recordings on the LSO Live label, and a further six recordings on other labels.  He has also been a jury member for the Donatella Flick LSO Conducting Competition on several occasions.