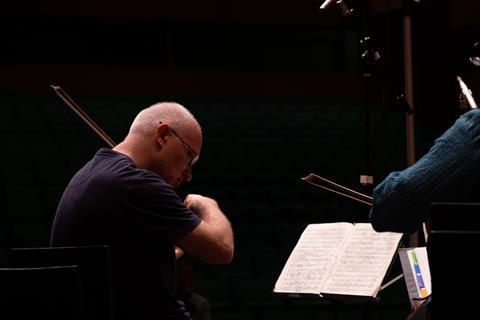 British violist Roger Tapping, who played for several renowned string quartets in the UK and the US, has died of cancer aged 61. Tributes are flowing on social media for a passionate chamber musician who inspired students and colleagues on both sides of the Atlantic.

The pleasure he derived from music-making was palpable and inspiring, not just for those of us who were his colleagues, but for the generations of young musicians who were fortunate enough to have known and worked with him. - Areta, Astrid, and Ron

Tapping was born on 5 February 1960. A graduate of Cambridge University, he learned from Margaret Major and Bruno Giuranna, as well as participating in masterclasses with celebrated British violist William Primrose. He embarked on a busy musical career following graduation, joining the Raphael Ensemble, playing music for broadcast on the BBC in his early twenties. As an orchestral player, he held the role of principal viola with the London Mozart Players, was a member of the English Chamber Orchestra, as well as a founding member of the Chamber Orchestra of Europe.

An illustrious chamber musician, Tapping joined the UK-based Allegri Quartet in 1989, a post he retained until 1995, when he moved to the US to become violist of the Takács Quartet. He performed worldwide with the Takács Quartet including numerous Beethoven and Bartók cycles, the recordings of which for Decca/London earned the ensemble many awards, including three Gramophone Awards, a Grammy and three more Grammy nominations. Tapping performed with the Takács Quartet until 2013, whereupon he joined the Juilliard Quartet. Succeeding Samuel Rhodes, Tapping became only the third person to hold the viola chair since 1946.

A dedicated educator, he was most recently on the faculty of the Juilliard School, where he taught viola and chamber music. He also served on the faculties of the New England Conservatory, Longy School, Boston Conservatory, as well as the Royal Academy of Music and Guildhall School of Music and Drama in London. Appearing at many summer festivals in the US and Canada, Tapping also taught at  Itzhak Perlman’s Chamber Music Workshop, the Tanglewood String Quartet Seminar and Yellow Barn, and gave viola masterclasses at Banff.

An interview for The Strad in 2021 illustrates Tapping’s ability to work with others in a chamber music setting. Highlighting the importance of teaching students about voice leading, he spoke about making sense of intricate weaving melodies in Brahms’ chamber music: ’There’s so much going on that you have to find ways of being colourful, but without turning into a wall of sound. I often describe it as ”translucence” – making something beautiful that you can also see the other beauties through’

Tapping was the recipient of many awards, including member of the Order of the Knight Cross of the Hungarian Republic, an Honorary Doctorate from the University of Nottingham, and a Fellow of the Guildhall School of Music in London.

Read: Technique: Viola vibrato, and how flexible joints and a keen ear can enhance your expressive range - Roger Tapping