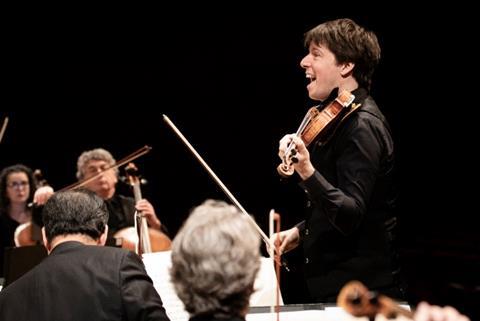 London’s Academy of St Martin in the Fields has launched its 60th anniversary season with the announcement that violinist Joshua Bell has renewed his contract as the ensemble’s music director until 2023.

Bell is only the second holder of the music director role at the Academy, succeeding the Academy’s founder Sir Neville Marriner, who held the post from the orchestra’s formation in 1958 until 2011, when he was named Life President. The violinist first collaborated with the orchestra in 1998, when he was 21 years old, in a recording of Bruch and Mendelsson concertos, with Marriner conducting.

Commenting, Bell said he was ‘truly thrilled’ to be extending his contract with the Academy. ‘Since the start of my tenure in 2011, the Academy has been my musical family, and each time we see each other it feels like both a homecoming and the start of a new adventure.’

In January Bell will lead the orchestra in a programme of Bach, Schubert and Piazzolla at Usher Hall in Edinburgh and Cadogan Hall in London. Later in the season the Academy and Bell will embark on a tour of the US, in a programme of Mozart, Brahms and Beethoven. The violinist will also perform as soloist in Paganini’s Violin Concerto no.1 and Mendelssohn’s Violin Concerto in E minor. The Academy also travels abroad this season with acclaimed guest artists such as Jörg Widmann, Fazil Say and principal guest conductor Murray Perahia.