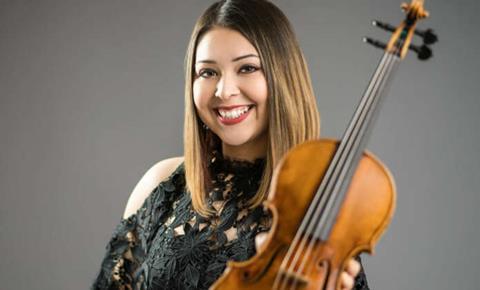 After a long search, the Jacksonville Symphony have appointed Adelya Nartadjieva as its new concertmaster.

’Adelya is a first-rate violinist with a beautiful sound. She’s played with many of the world’s finest conductors and will bring skill to the Jacksonville Symphony in spades,’ commented music director Courtney Lewis.

’She also did something amazing during her trial weeks here: created consensus between the orchestra, the search committee and me! I’m very excited about having her join us, especially after such a long search.’

Nartadjieva commented on her appointment: ’I am so delighted to be joining the Jacksonville Symphony family for next season and the years to come. It is an honour to be part of such a vibrant and warm artistic atmosphere. I can’t wait to make music together and share it with the community.’

A passionate artistic director and educator, Nartadjieva has taught for Carnegie Hall in several New York City schools. She is the co-founder of Chime for Children, an organisation that aims to inspire children with limited access to music through interactive performances.

She has performed with Frisson Ensemble, Sejong Soloists, Orpheus Chamber Orchestra and Decoda Ensemble. Recently, she performed as guest associate concertmaster for Experiential Orchestra’s recording of Dame Ethel Smyth The Prison, which won a Grammy Award in 2021.

Nartdjieva studied with Hyo Kang at Yale School of Music,  Glenn Dicterow and Lisa Kim at Manhattan School of Music and Qian Zhou at Yong Siew Toh Conservatory of Music in Singapore. Recent awards include first prize at the Woolsey concerto competition at Yale, Gershwin International Competition, an education grant from the Rachel Barton Pine Foundation, and the Broadus Erle prize from the Yale School of Music.