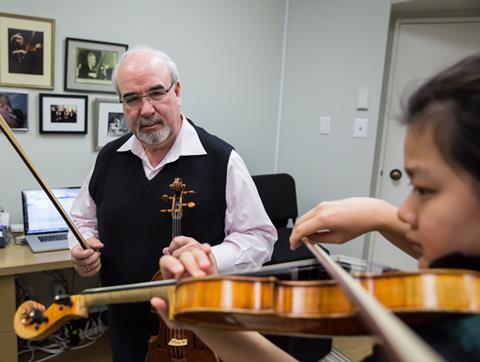 Dicterow currently serves on the faculty of USC Thornton and was named the Robert Mann Chair in Strings and Chamber Music in 2013. He gives up this seat to take up the Jascha Heifetz chair, established in 1974 to honour the legendary violinist.

A graduate of the Juilliard School who was mentored by Ivan Galamian, Dicterow also had the opportunity to study with Heifetz, who was a faculty member at USC for over 20 years. Heifetz has been a lifelong inspiration for his music making.

’Since I was a young violinist, I have been heavily influenced by the artistry of Jascha Heifetz,’ Dicterow said. ’It had always been my dream to someday return to USC to teach, where, as a young teenager, I had the privilege of studying with this iconic genius.

’I have spent my entire life espousing Heifetz’s unique musical interpretations, as well as his dazzling technique. As testified by my numerous students over the years, I have always championed Heifetz’s recordings, which continue to inspire us. He brought such unique style, imagination and colour to the vast repertoire he performed.

’My aim is to carry on the message of Jascha Heifetz to a new generation of musicians who may not be as familiar with his truly remarkable, one-of-a-kind music making.’

An accomplished pedagogue, Dicterow has taught at Juilliard and given master classes around the world. He has chaired the orchestral performance programme at the Manhattan School of Music for two decades, and helms the strings leadership programme as a faculty artist at the Music Academy of the West in Santa Barbara.