Jack Liebeck takes up new posts in London and Australia

British violinist is ‘Émile Sauret Professor of Violin’ at the Royal Academy of Music; and incoming artistic director of the Australian Festival of Chamber Music 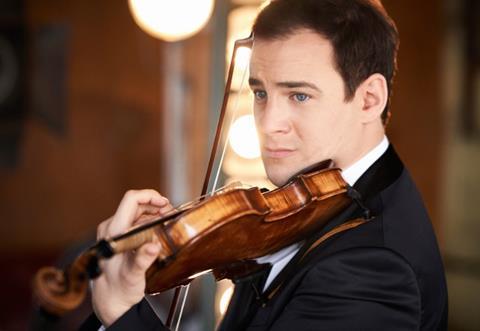 British violinist Jack Liebeck has been named the first ‘Émile Sauret Professor of Violin’ at the Royal Academy of Music (RAM) in London, a role created especially for him by the college.

Liebeck is a former student of the RAM and serves on the faculty as professor of violin. In the new ‘named professor’ role he will be involved in the development and delivery of the academy’s degree programme, and will participate in auditioning, examining and coaching. He will also act as an ambassador for the college, championing its string teaching and developing links between the teachers and potential students.

The violinist writes: ‘I am extremely honoured to take up the position as the Émile Sauret Professor of Violin at the Royal Academy of Music. The role enables me to develop my teaching, about which I am passionate, but also to make links worldwide as an ambassador, attracting the very finest young musicians to study at the Academy, just as I did 25 years ago.’

He marks the start of the new professorship by giving a masterclass at Angela Burgess Recital Hall at the Academy today, 13 January, at 4pm.

The professorship is named after Émile Sauret (22 May 1852 – 12 February 1920), recognised as one of the most significant influences on the development of violin pedagogy. He taught at the Royal Academy of Music at the turn of the 19th century and had a distinguished performing and composing career.

Also announced is the news that Liebeck is to replace British pianist Kathryn Stott as artistic director of the Australian Festival of Chamber Music (AFCM) in Townsville, North Queensland. The annual gathering, which is the largest chamber music festival in Australia, launched in 1991; Liebeck takes up the post from 2021, the 30th anniversary of its founding.

Festival chair Sandra Yates AO said: ‘The AFCM has undertaken an international search to replace current artistic director Kathryn Stott, who steps down at the conclusion of the 2020 festival. Jack Liebeck is one of the world’s great violinists and teachers.’ AFCM executive director Gavin Findlay added: ‘Jack knows our festival well, and we are most fortunate to have another musician of such stature at the helm. As just the fourth artist director in AFCM’s stellar 30-year history, Jack is ideally placed to build on the legacy forged by Kathryn Stott, Piers Lane AO and founder Theodore Kuchar.’

Liebeck commented: ‘As a player, I experienced seven enjoyable AFCM’s during Piers Lane’s tenure, forging many links and musical friendships. Now in its 30th year, the event has proven to be one of the outstanding chamber music festivals in the world, and perhaps the largest in the Southern Hemisphere. I look forward to programming my first festival in Townsville posthaste!’

The violinist is artistic director of his own music festivals: Oxford May Music, the DESY Humboldt Science and Music Series in Hamburg, and Alpine Classics in Grindelwald, Switzerland. His interest in the links between music and science has brought him into collaboration with the British physicist and television presenter Brian Cox, and on 14 January he joins Cox at Kings Place in London for an illustrated talk based around the seasons, which will include a performance of Vivaldi’s Four Seasons.

After making his debut with the Hallé Orchestra, Liebeck embarked on a career as an international performing and recording artist. He is a member of the Salieca Piano Trio and directs his own ensemble of regular collaborators, Jack Liebeck and Friends. His interest in science has led to several arts and science collaborative projects, among them the world premiere performances of Dario Marianelli’s Voyager Violin Concerto, and A Brief History of Time with Cox and Daniel Harding, composed by Paul Dean, commissioned for Liebeck by the Melbourne Symphony Orchestra and premiered in November 2019.

Read: Sing your way to playing perfection with Jack Liebeck