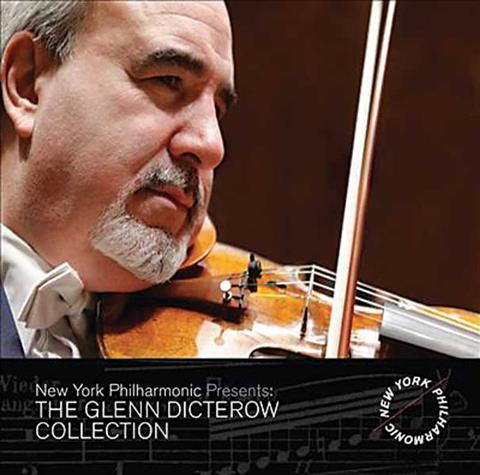 What do you give your concertmaster of 34 years when he moves on? Glenn Dicterow’s gift from the New York Philharmonic was a three-volume tribute of live recordings (volumes 2 & 3 are available as download-only), celebrating more than 6,000 performances with the orchestra, over 200 of them as soloist.

Dicterow’s ample, sweet tone is on show throughout Bruch’s First Concerto but the performance is uprooted by Maazel’s stodgy, over-expansive approach: the awkwardly drawn-out themes become a burden on their return and the orchestral strings at climaxes seldom pull back from full throttle. Unaccountably, the first and second movements are merged as one track.

Dicterow illuminates the post-Straussian first movement of Bartók’s early Violin Concerto no.1 with an uncanny virtuosity, an effect that only seems to be enhanced as he soars upwards in unaffected rapture. The verdant, cinematic journey from here to Korngold and thence to Schindler’s List is nicely judged. David Robertson extracts a diaphanous, sensuous sound from the orchestra in the former and Dicterow’s playing remains blemish-free. Nor is there any lack of pithiness in the finale. And if there’s a touch of what seems like stilted rubato in the Schindler’s List theme, it’s at least done under the baton of its composer, John Williams.