Never judge a book by its cover

This story about the instrument repairer and the farmer's violin from The Strad, November 1959, contains all the hallmarks of the Hans Christian Andersen tale The Ugly Duckling. Its message remains as pertinent today as ever 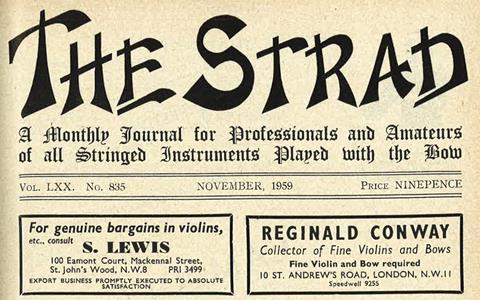 Violins, like people and horses, often times do not run true to form. Many an old dilapidated looking instrument of obviously poor workmanship possesses a tone that is comparable in beauty and volume to the best of the old Cremona masters; and in my entire forty years of experience as a violin maker and repairer in the Pennsylvania Dutch community of Allentown, none remain as vivid in my memory as the Dutchman’s ‘Strad’.

This violin was brought to my shop by an old farmer who had secured it at a public auction for the princely sum of a dollar and a half, because (as he claimed) no one had taken the trouble to look inside and read the label, Antonius Stradivarius Cremona fecit Anno 17 –. The model was a cross between a Stainer and an Amati, probably the work of an amateur Tryolean maker, the top was a mess of cracks and poorly repaired fractures, the scroll was hideous, practically all the varnish was worn off, the workmanship I had never seen equalled for carelessness and crudeness, and the only thing that appeared authentic was its age, which I estimated to be around two hundred years.

No amount of persuasion could make the owner change his mind about having it repaired, and costs were no factor; for after all, no one was going to tell him it wasn’t a Strad and do him out of his find. At last, against my better judgement, I agreed to take the top off, glue the cracks, and put it in playing condition if at all possible. After I had the top off, I seriously regretted my decision, for the top, besides being very thin, was so uneven that muslin had been used in repairing the cracks, as wooden patches could not have been properly aligned, in most of the cracks the splinters were laid in and covered over with about one sixteenth inch thickness of glue, and the bass bar was all of six inches in length.

Further inspection revealed no corner blocks, the lining strips were not only poorly fitted but were of various sizes, the end blocks poorly shaped and rather large, but astonishing as it might seem the wood was of excellent quality with a rather broad grain for a medium high arched fiddle. The graduations had been coarsely done and appeared as a series of bumps and ridges. In short the only good feature about the instrument was the quality of wood, which was undeniably good.

In order to spare the owner any unnecessary expense I decided to merely repair the cracks as best I could, reglue the top, and string it up, as regraduating and replacing the bass bar were operations one does not normally do to such monstrosities as this wormeaten old fiddle. After I had finished my repair work I wasted some more precious time in fitting a bridge to the badly indented top, which incidentally had a sound post patch the size of a half dollar. A new sound post was fitted, more in deference to the owner than to the fiddle, strings were put in place; and the only question that now remained was how bad would it sound.

As I turned the instrument to its proper pitch I was somewhat taken back by the excellent quality of the tone heard when the strings were plucked, but gave it scant attention for a fiddle in this condition simply had to have a poor tone; just as too many players predetermine that all old Italian fiddles must be good, so are too many of us makers prone to deny merit to instruments that meet with our disapproval. But when I drew the bow across the strings I was so astounded at the mellow and responsive tone of ample volume that I telephoned an amateur fiddle making friend to come right over so that we could make a thorough tonal test of this instrument by comparing it with several fine fiddles I had on hand.

With the assistance of my friend, the amateur fiddle maker, a comparative tonal test was made by alternatively playing and listening to four instruments which included in addition to the Dutchman’s Strad, a very fine old French of the Parisian school, an exceptionally good new fiddle, and an old certified Italian attributed to the Guadagnini family. After an exhaustive test for tonal superiority, both for timbre and responsiveness, it was our unbiased conclusion that the Dutchman’s Strad had the edge over the other three instruments; a further check was made for carrying power by playing the four instruments in a nearby hall of medium size, and here it was found that the Dutchman’s Strad compared favourably with any of the other three instruments.

It has been the experience of such incidents that has led me to formulate the opinion that the tone of a violin is dependent primarily on the quality of the wood and the skill used in making the graduations. The varnish factor is highly debatable, almost any good varnish will give excellent results if properly applied and specific attention is paid to the filler; oil or spirit varnish may be used with equally good results possible, as many of the old Italians attest.

The conflicting theories on violin tone prove conclusively that the tonal quality will in the end depend primarily on the individual maker’s preference or analysis of the factors that enter into tone production, and it’s my opinion that were the contemporary makers as eager to exchange constructive ideas as they are ready to give destructive criticism of each others’ instruments, the art of violin making would in time equal and eventually surpass the old Cremona standards. If the obscure maker of the Dutchman’s Strad could produce a tonal masterpiece by having the common sense to select good wood and experimenting with the graduations until a desired result was obtained, why can’t present day makers do likewise – working for an ideal instrument for the future would surely be more self satisfying than trying to imitate the instruments of the past.

I might add that, when the Dutchman was informed of the fine tone possessed by his instrument, he naively replied, ‘what else would you expect from a Strad!’