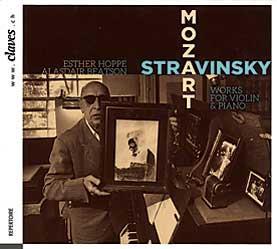 Alasdair Beatson is the more prominent protagonist in the two Mozart sonatas but Esther Hoppe admirably complements his perceptive playing in their various exchanges, particularly in the finales. Their close rapport and flexible performance approach yield elegant, accomplished readings, which are persuasive in their vitality. Hoppe’s warm, graceful and unhurried contribution in both of the slow movements is particularly enjoyable – she caresses significant notes appropriately and realises ornamental lines non-metrically, as if spontaneously. Spontaneity is also the key to their thoughtfully timed, subtly inflected interplay in K454’s opening Largo, and their account of the subsequent Allegro combines athleticism, brilliance and humour.

Their performance of Stravinsky’s Divertimento faithfully recreates the atmosphere and programmatic aspects of his ballet The Fairy’s Kiss, ‘inspired by the Muse of Tchaikovsky’. Hoppe may not quite match the verve and intensity of, for example, Judith Ingolfsson in this repertoire (Audite) but she maintains the dance-like character of the four movements, especially in the folksy ‘Danses suisses’ and the capricious scherzo. She also recreates most effectively the glacial world of Hans Christian Andersen’s ice maiden and shades Stravinsky’s magical themes with striking colour. Beatson provides virtuoso support. The recording is first class, adding pleasing bloom to the sonorous tone of Hoppe’s 1609 Gioffredo Cappa instrument.