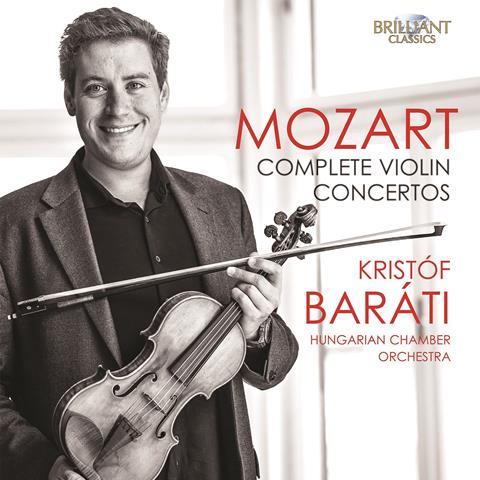 It is of course something of a cliché to say that, these days (whenever that is), violinists lack the variety of the Golden Age (whenever that is). This is somewhat undermined by the fact that Baráti plays Mozart with such aplomb in spite (and maybe because) of his alignment with a present-day stylistic consensus. He evinces a lithe energy in all of the performances on this disc – equally characteristic of the Hungarian Chamber Orchestra, with whom he has obvious artistic sympathy.

The recordings on these discs are of live performances, and the consistency is remarkable, save for a couple of sharp notes in the first movement of the A major Concerto, and some rather over-played passages in the first movement of the B flat major. Slow movements are well paced and avoid tonal unctuousness. My favourite, the A major ‘Turkish’, is colourful and enthusiastic, and exemplifies the approach elsewhere – a bright sound with vibrato generally tightly controlled, lively articulations and a great sense of fun – which is important in these works. There is little that is ‘unusual’ in these performances but the standard is high and enjoyable. Brilliant Classics crafts a lovely recorded sound as well. A very pleasing album of modern Mozart playing.