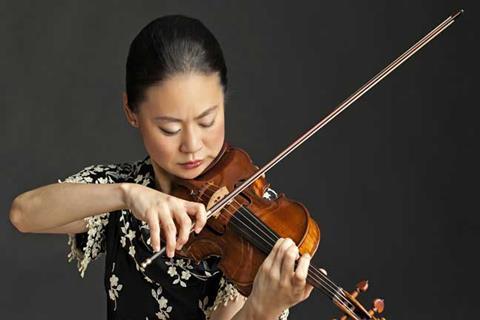 Born in Japan, Midori Goto began her studies with her mother - also a concert violinist - at the age of three and made her debut in Osaka, Japan, four years later. At the age of nine she played at the Aspen Musical Festival, before enrolling at the Juilliard School to study with Dorothy DeLay the following year. In her early teens, she performed with the New York Philharmonic under the baton of Rubin Mehta and joined composer-conductor Leonard Bernstein on stage to perform his Serenade at Tanglewood. She then went on to make her recording debut with Bach and Vivaldi on the Philips label, all by the age of 14. As an adult professional, although initially strongly associated with Mehta, Midori has worked with a variety of renowned conductors and orchestras worldwide. Midori's numerous awards include both musical and humanitarian honours. She was a winner, in 2001, of the Avery Fisher Prize, and in 2007 United Nations Secretary-General Ban Ki-Moon named her an official Messenger of Peace. She has balanced her concert career with a master's degree in psychology from New York University in 2005 and currently holds the Jascha Heifetz Chair at the Thornton School of Music at the University of Southern California. Her violin is the 1734 Guarnerius 'del Gesù' 'ex-Huberman'.