Run by the Central Academy of Arts, the contest received 61 separate instrument and bow entries this year, while makers hailed from nine different countries 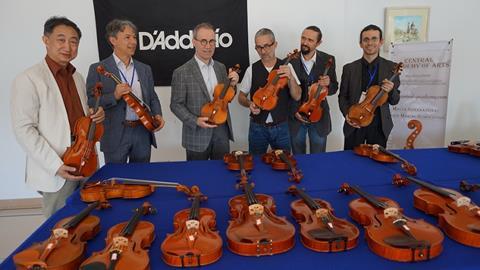 The Malta International Violin Making Competition, which took place in February 2017, has named its category winners.

Run by the Central Academy of Arts, the contest received 61 separate instrument and bow entries this year, while makers hailed from nine different countries. Representatives of China headed the field with 23 makers, followed by Italy, Japan, South Korea, UK, US, Sweden/France, Czech Republic and Cyprus.

In the Viola category, the gold medal was awarded to Marco Osio of Italy. Silver was shared between Han Zhaosheng of China and Seung Jin Lee, while bronze went to Zhao Yi of China and Wang Yanli of China.

The jury this year included makers Zheng Quan, Christophe Landon and Simeone Morassi, who judged instruments on size compliance; choice of material; quality of craftsmanship and finishing; tone and playability; and balance and performance .

The 2018 contest is due to take place from 9-14 February and is open to professional and amateur makers of violins, violas and cellos, as well as violin, viola, cello and bass bows. The deadline for entries is 15 December 2017.