From the Archive: a violin by Giovanni Grancino, 1697 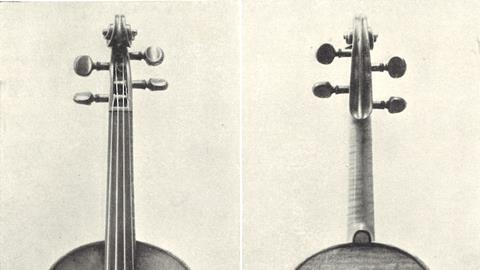 This illustration of a 1697 violin by Giovanni Grancino was published in The Strad, July 1928. The following text is extracted from an article accompanying the photographs:

Thought the illustrated Grancino is early in date and somewhat indefinite in style, it is large in pattern, comparatively flat in model, whilst the construction of the instrument is decidedly robust.

Giovanni Grancino had leapt clean out of the seventeenth century, in spirit, and had produced an instrument which shows as great a contrast to a fine Rugeri, as many violins would which were made two and three generations later.

The slightly-figured wood is a frequent choice of Milanese masters, though it is probable that it was largely a matter of necessity, and a strikingly handsome back is so unusual as to constitute a considerable rarity.