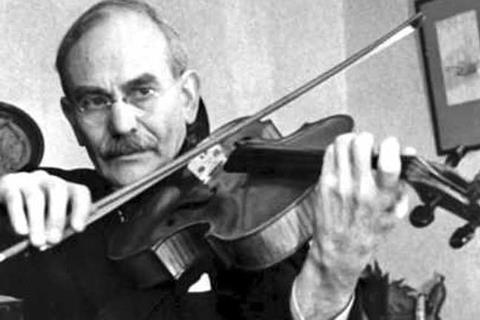 Lionel Tertis was a key figure in establishing the viola as a solo instrument, greatly expanding its repertoire and prominence. Born in West Hartlepool to Polish-Jewish parents, he began his studies on the violin before leaving home at the age of thirteen, paying for his own musical education through money he earned playing the piano. After spending six months with Carrodus in Leipzig, he finished his studies at the Royal Academy of Music. It was there that he switched instruments in order to fill the violist's seat in a student quartet. Tertis quickly developed his reputation by performing transcriptions of the Mendelssohn and Wieniawski D minor violin concertos, exhibiting the virtuosic potential of his adopted instrument. Greatly influenced by the violin playing of Fritz Kreisler, Tertis cultivated a trademark vibrato style for which he became well known. On top of his solo career, Tertis devoted much time to teaching throughout his life, particularly as Professor of Viola at the Royal Academy. He was also a founding member of the Chamber Music Players alongside William Murdoch, Albert Sammons and Lauri Kennedy. In 1950 he was appointed a Commander of the Order of the British Empire (CBE) and in 1980 the Lionel Tertis International Viola Competition was established to honour his memory.