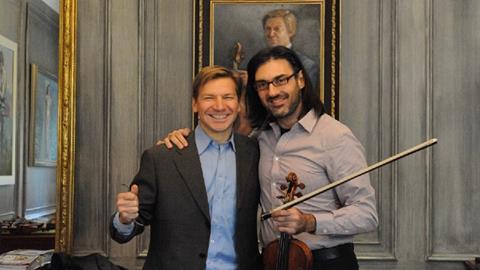 Named after 19th century collector Charles Willemotte of Antwerp, the 1734 instrument was first performed by Kavakos in 1994:

'My very first acquaintance with the 'Willemotte' took place back in 1994 in NYC, during the wonderful exhibit of Guarneri 'del Gesù' violins at the Metropolitan museum,' said Kavakos. 'I asked whether I could play a few notes on it. That was it! I will never forget that impression I had. All the sweetness of Stradivari sound was there, of course, but what amazed me was the combination of that with an impressive volume and, even more, the colour of depth and darkness, which one doesn’t always associate with Stradivari sound. 'I really hope I can have a violin like this one day!' I thought, and gave it back to the owner.'

Kavakos was reunited with the instrument two decades after his initial encounter when he visited Florian Leonhard Fine Violins in Hampstead, North London.

'Florian brought the Willemotte and asked me whether I knew it! I told him the story of course, and immediately started playing on it,' explained Kavakos. 'This time, coming from the 'Abergavenny' Stradivari of 1724, which, by the way, I also got from Florian and have played on for the last eight years, my impression was similar to the one 23 years ago. But due to the difference of sound colour and production, I needed time to adjust. While the 'Abergavenny' has a very smooth big round tone, I was struck by the 'Willemotte'’s electricity and intensity that crowns the underlying darkness. It is so fast and responsive, one almost has to hold back! And yet, all the colours and elegance are there, waiting to be explored!'