Violinist, who took on artistic directorship in 2011, will now stay in role until at least 2020 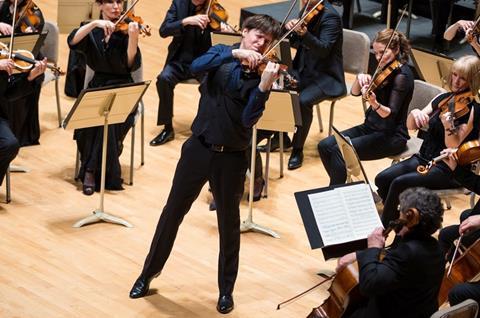 Joshua Bell has renewed his contract as music director of the Academy of St Martin in the Fields for three years, until the end of the 2019/20 season. He has been at the helm of the London-based chamber orchestra for six years already, directing diverse repertoire from the leader’s chair.

Bell took on the artistic director position in 2011, taking over from the orchestra’s founder, Sir Neville Marriner.

‘The Academy is an incredible group of musicians, and they are like family to me – our tours together are always highlights of my year. Having served as the Academy’s Music Director since 2011, I’m thrilled that we’ll be continuing our relationship for another three seasons, and I’m very excited about the plans for 2017/18 that we’re presenting today. Here’s to the next chapter in our adventure together!’

Bell residency at the 2017 Edinburgh International Festival will include a performance with the Academy on 24 August at Usher Hall, including Bruch’s Scottish Fantasy, Beethoven’s Pastoral Symphony and Mendelssohn’s Midsummer Night’s Dream Overture.

The second half of 2017 will see Bell tour with the orchestra to Bucharest, Frankfurt, Reykjavik and Cambridge, and he will give the UK premiere of Edgar Meyer’s Overture for Violin and Orchestra in January at London’s Cadogan Hall, before touring it around the UK and to Friedrichshafen.

He will take the orchestra on a 15-date US tour in March 2018 and a tour of Asia beginning May 2018, before ending the season with a third annual residency at the Bravo! Vail Festival in June 2018.