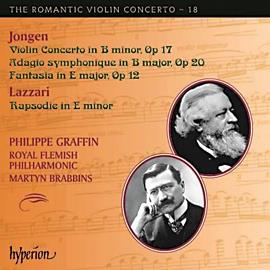 Hyperion’s Romantic Violin Concerto series reaches volume 18 with a heartwarming programme of unjustly neglected music, played by Philippe Graffin with a soaring intensity and tonal purity that fits hand-in-glove with its gentle, post-Wagnerian opulence. The chromatically inflected sound world of Italian Sylvio Lazzari’s E minor Rapsodie suggests that he experienced its Germanic exemplar through the twin prisms of Chausson and the Russian post-Romantic generation. The result sounds remarkably, at times, like reined-in Delius, with the soloist subtly weaving in and out of the orchestral textures rather than continually swashing his virtuoso buckler.

Although Joseph Jongen’s Concerto was composed shortly after a visit to Bayreuth at the turn of the last century, it sounds far closer to the Russian–Polish tradition of Arensky, Glazunov, Conus and Wieniawski than the hothouse harmonic plasticity of the contemporaneous Franco–Belgian school. Graffin’s tonal transparency, ear-ringing intonation and phrasal intuitiveness – the lyrical episode from 9’37† in the opening movement is particularly exquisite – are a constant source of pleasure, captured in alluringly tangible sound. Indeed, such is the captivating flair and insight demonstrated by soloist, conductor and orchestra that it defies belief these scores could have lain virtually forgotten for so long. First-rate annotations from Nigel Simeone provide the musical icing on the cake.