An essential way to improve tone and intonation by Michael Frischenschlager, professor emeritus of violin at the University of Music and Performing Arts, Vienna 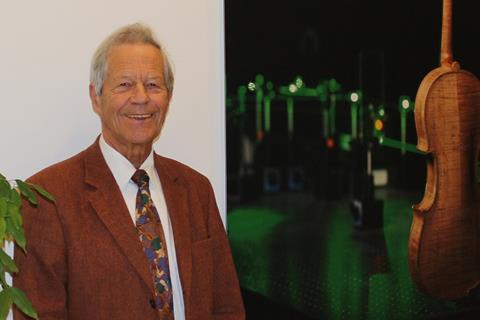 Heifetz insisted that his students practise scales and arpeggios three hours a day. I don’t ask mine to spend that much time on them, but I do insist on at least one hour. Assuming you don’t specialise in aleatoric music, they are fundamental to your technique. I’ve been teaching for 44 years, and those who take their scale practice seriously invariably progress more quickly. A less talented player who practises scales will often go further than someone more talented who does not. If you want serious success in anything, you must work hard. There is no way around it. I teach scales and arpeggios in four different programmes, each lasting approximately two months. Below is an introduction to the first and second stages (the third and fourth include work in three and four octaves).

When possible, work in pairs using the harmony line indicated. This is more fun and means you have to play very rhythmically. Always think about sound quality! Play each exercise: first ppp, then fff, in major and then minor, with vibrato and without vibrato (for the arpeggios, play only mf and focus on string-crossings and tuning) in minims (half notes), quavers (eighth notes), quaver triplets, semiquavers (16th notes), semiquaver triplets and demisemiquavers (32nd notes). I recommend a metronome marking in the range of ♩ = 60–92. Playing the fastest notes will be tough!

Scale practice is as important for the right hand as for the left. The first thing is to achieve a beautiful detaché, whether you are using slow or fast bows. Play both as loudly and as quietly as possible in order to learn how to achieve the best bow speed and sounding point without sounding scratchy. Practise the top line of the scale pattern shown in exercise 1a, really feeling the relationship between the bow and the string in both dynamics Now practise the other note values (for triplets, use the pattern shown in exercise 1b).

To solidify your left-hand position, practise the note pattern in exercise 2a in first position (exercise 2b for triplets). Concentrate on intonation and rhythm Practise the same pattern up to eighth position, always starting with the first finger on the G stringNow use arpeggios to work on intonation and smooth string-crossings. If you can play demisemiquaver arpeggios above sixth position well, you are already a virtuoso! Practise two-octave arpeggios in the key of G. This time start with quavers, not minims (example 3). Now play the same in the key of A, starting on the first finger (example 4). Repeat in every position up to eighth.

Two-octave scales and arpeggios on one string are important for shifting and intonation work. Think about the finger you use to shift and how it synchronises with your bow.

For the scales, use the pattern in exercise 5. Begin each rhythm at a different part of the bar, to alter the timings of your shifts and string changes Try each pattern with separate bows and slurred, starting on a down bow and then on an up bow

Arpeggios on one string (exercise 6) are particularly hard work because it is difficult to play them in tune. Practise in a rhythm of two short notes followed by a longer note (you can change the note values) For diminished and dominant 7ths, the rhythm should be one long followed by three shorter notes

When playing most repertoire, I prefer to shoot up the E string without going into a higher position beforehand, for added brilliance. Practising two-octave scales without shifting and two-octave scales on one string makes this easier to do in, for example, Paganini’s Caprice no.5.

All of my students work on at least one Paganini Caprice continually, as well as a Bach or Ysaÿe solo sonata. In other repertoire, the Beethoven Concerto (see Masterclass, page 69) is made up almost entirely of scales and arpeggios and is excellent for consolidating these skills.

If you were my student, I would say: practise scales and arpeggios for at least one hour every day, working on the right and left hands equally; then spend another hour on other technical elements such as double-stops (3rds, 4ths, 5ths, octaves), bowing, shifting and trills. After that, work on your repertoire – always a piece of Bach or Paganini alongside as many other works as you want. You should not have to stop playing because your body hurts – you should have to stop playing because your mind is tired, because you’ve been concentrating so hard and thinking so much.

I give my students one group technical lesson and one private lesson for repertoire each week. Sometimes, if I am teaching one private student and the next arrives early, we will work on scales in pairs for 20 minutes. If somebody has fallen behind in the technique class, I will say to them, ‘Next week we must do technique in your private lesson, because you haven’t worked hard enough.’ They will never play the violin really well without a perfect technique. That doesn’t mean that they have to be virtuosos – it just means that there has to be quality in everything they do.

Dont Etudes op.35 are useful supplementary studies for working on technique. I often give these to students to work on alongside their other technical exercises.

This article was first published in the December 2015 issue of The Strad, still available in print or as a digital edition